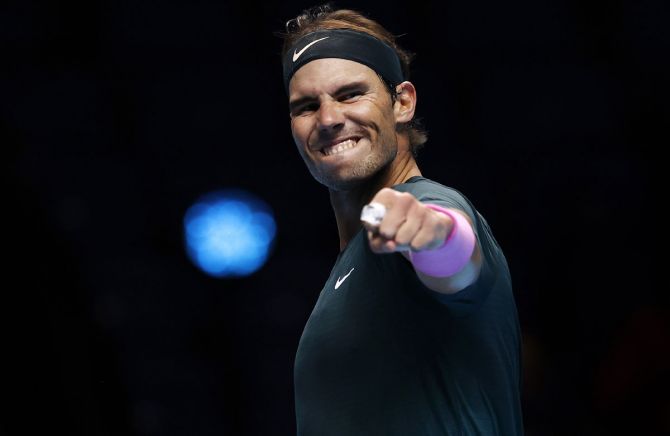 Rafael Nadal's hopes of winning the year-ending ATP Finals for the first time live on after the Spaniard beat defending champion Stefanos Tsitsipas 6-4, 4-6, 6-2 on Thursday.

The last round-robin match in the London Group had become a straight knockout with both men having lost to Dominic Thiem and beaten Andrey Rublev earlier in the week.

But it was Spaniard Nadal who always appeared the more likely winner despite a lapse which allowed Tsitsipas to extend the contest into a decider at a near-deserted O2 Arena.

After a flurry of service breaks at the start of the third set, the 34-year-old Nadal showed all his experience to pull away and reach the semi-finals for the first time in five years. 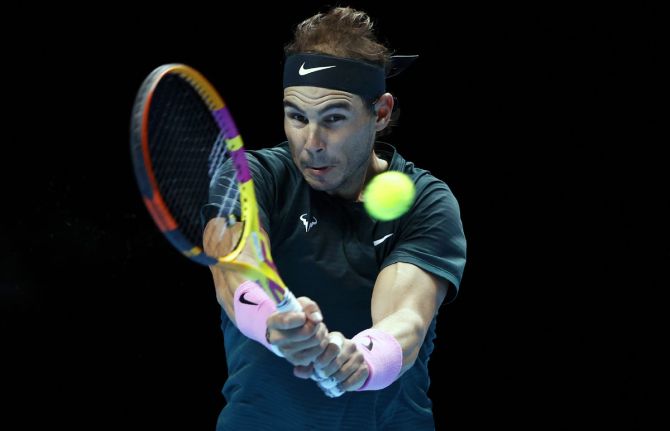 IMAGE: Rafael Nadal was untouchable on his serve in the first set, losing only five points, and the pressure told on Stefanos Tsitsipas who was unable to unleash his attacking game. Photograph: Clive Brunskill/Getty Images

As group runner-up behind Austrian Thiem, he will face Daniil Medvedev for a place in the final with the Russian already assured of top spot in the Tokyo Group.

World number one Novak Djokovic plays Alexander Zverev on Friday with the winner to play Thiem in the other semi-final.

"In general this was a very positive match for me," said Nadal, who despite winning 20 Grand Slam titles has only two runners-up places to show for his previous nine appearances at the ATP Finals. "Excited to be in the semi-finals."

Nadal was untouchable on his serve in the first set, losing only five points, and the pressure told on Tsitsipas who was unable to unleash his attacking game.

The Greek fought off break points at 3-3 but at 4-4 he buckled with a double-fault allowing Nadal the chance to serve for the opening set, a task he achieved with successive aces. Nadal had won his previous 70 matches when winning the first set so Tsitsipas's prospects looked bleak, but he was handed an unexpected lifeline when Nadal hit trouble serving at 4-5.

A well-struck backhand earned Tsitsipas a couple of set points out of the blue and while Nadal saved one with a first serve he then double-faulted to send the match into a decider.

Tsitsipas immediately dropped serve, but broke Nadal again when the Spaniard netted a backhand. The Greek could not seize the initiative, however, and a loose backhand ensured a fourth straight break of serve after only one in the first 19 games.

Nadal then regained his authority to power home.

Tsitsipas, who enjoyed his breakthrough moment here last year when, aged 21, he beat Thiem in the final, was downbeat about his performance.

"I fought hard in the second set but very disappointed with the third, I was rushing and didn't know what I was trying to do honestly. I should have been a bit more clever," he said. The aggressive 23-year-old took full advantage of a rather flat performance by Thiem who had already sealed his place in the semi-finals with two wins in the London Group.

Defeats by Nadal and Stefanos Tsitsipas meant Rublev was playing only for pride although the $153,000 bonus for a group stage win provided a sizeable incentive.

The world number eight, who won a tour-leading five ATP titles this year, put the hammer down from the start, taking a 4-0 lead on his way to winning the opening set.

Rublev grabbed an early break in the second set but faltered at 4-3 when a netted forehand allowed Thiem to level.

But Rublev broke the Austrian world number three again at 5-5 with a thumping forehand and finished the job a game later.

He will look back on a missed opportunity having double-faulted when he held a match point against defending champion Tsitsipas in his second match.

Thiem will shrug off the defeat and now has a day off to prepare for Saturday's semi-final when he will face either world number one Novak Djokovic or Alexander Zverev.

Later on Thursday Nadal faces Tsitsipas with the winner joining Thiem in the semi-finals.

© Copyright 2021 Reuters Limited. All rights reserved. Republication or redistribution of Reuters content, including by framing or similar means, is expressly prohibited without the prior written consent of Reuters. Reuters shall not be liable for any errors or delays in the content, or for any actions taken in reliance thereon.
Related News: Andrey Rublev, ATP Finals, Stefanos Tsitsipas, Dominic Thiem, Alexander Zverev
SHARE THIS STORYCOMMENT
Print this article 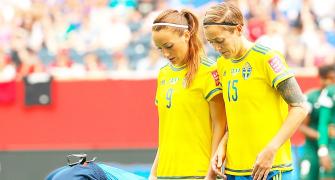 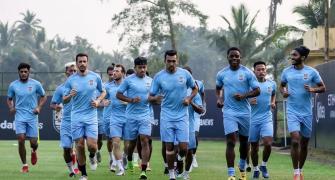 Goa to kick-off football action amid Covid-19 with ISL 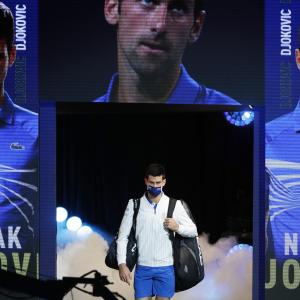 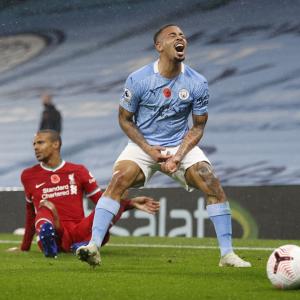