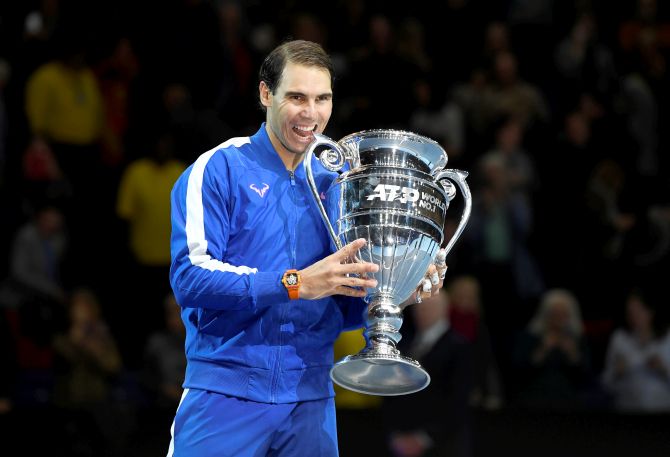 IMAGE: Spain's Rafael Nadal celebrates with the ATP World No.1 trophy after winning his ATP World Tour Finals group stage match against Greece's Stefanos Tsitsipas in London on Friday. He was announced the year-end World No 1. Photograph: Tony O'Brien/Action Images via Reuters

For the second time in three days Rafael Nadal fought off one of the game's rising powers, beating Stefanos Tsitsipas 6-7(4), 6-4, 7-5 to stay alive at the ATP Finals on Friday.

However, the 33-year-old Spaniard will not know until later on Friday whether his Herculean effort was in vain.

The world number one needs Russian Daniil Medvedev, who can no longer reach the last four, to beat Germany's Alexander Zverev in the concluding round-robin match to secure top spot in the group and a semi-final clash with Swiss rival Roger Federer.

Should Zverev win, Nadal will finish third in the group despite having two round-robin wins with Tsitsipas finishing top and going on to play Federer.