IMAGE: A volunteer checks the temperature at the Luge start during previews ahead of the PyeongChang 2018 Winter Olympic Games. Photograph: Alexander Hassenstein/Getty Images

Sub-zero temperatures could be a real issue for visitors in Pyeongchang for this month's Winter Olympics, but while Games fans shivered, athletes on Monday welcomed the cold.

With freezing temperatures of minus 10 degrees celsius in the day and around minus 20 (minus four degrees fahrenheit) during the night it could prove challenging for the last week of preparation before the opening on Friday.

In Pyeongchang, big coats, gloves and good shoes were a must to face the cold, enhanced by strong winds. One student from Seoul, on holiday with his parents, said even South Koreans weren't used to such low temperatures. 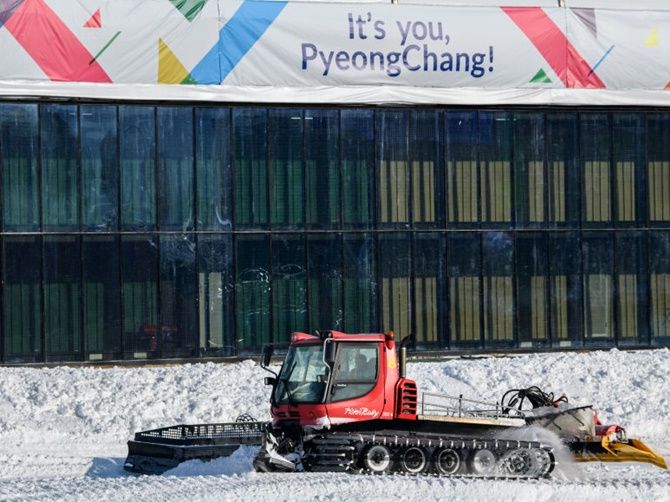 IMAGE: A snow plough moves snow on a frozen river ahead of the 2018 Winter Olympics. Photograph: Carl Court/Getty Images

"It's not usually this cold in this area in this season but very cold, I cannot even think of the words, I think my brain is frozen or something," shivered student Kyungtae Lim, visiting from Seoul.

"I'm a little bit worried about Olympic players... many of the players are from not so cold countries so I don't think they'll perform very well, and I'm also worried about the tourists."

On Friday, when the Games will be officially launched at the opening ceremony, spectators fortunate enough to have got a ticket will have to wrap up at the outdoor stadium at the Olympic Plaza where temperatures will be hard to sustain.

But for the athletes, cold temperatures are good news as the snow and the courses remain stable throughout the competition. "I'm not (happy about the cold), like my body's not," smiled U.S. mogul skier Brad Wilson.

"But as far as the conditions go, absolutely (I am happy), we're in winter sports for a reason, when it's cold like this it's good, it's a good thing, yeah. As long as we can stay warm."

"We haven't had to deal with a ton of cold this year, it's been pretty warm," added U.S. mogul skier Jaelin Kauf.

"It just means pack more layers... maybe do a lot extra warmup at the top of the course, but that's about it."