At 41, it's mission possible for Tom Cruise fan Chusovitina at Olympics

- 'It’s hard to believe that someone Oksana's age will be competing at the Olympics.'

- 'How can someone her age dare to do that to their body?'

- 'You’ve got be a little bit crazy to do such a brave thing. Hats off to her. It’s amazing.' Being the oldest gymnast to compete at an Olympics has earned Oksana Chusovitina admiration as "brave", but there seems to be one big reason why the 41-year-old keeps punishing her body - a love of Tom Cruise.

“I have a picture of Tom Cruise on my wall as I really like him. So I look at him every day and think I have to look young for him. Someday, if and when I meet him ... I shouldn’t look too old,” said the gymnast who won team gold with the Unified Team in 1992 on her Olympic debut.

Chusovitina may not want to look old for her Hollywood hero but in a sport over-populated with teenagers, she is almost pre-historic as her gymnastics lifespan of competing in seven successive Olympics defies logic.

While she is almost three times older than the youngest gymnast in Rio, 15-year-old Belgian Senna Deriks, the next oldest competitor after Chusovitina is 32-year-old Vasiliki Millousi from Greece.

"It’s hard to believe that someone Oksana's age will be competing at the Olympics," Romanian great Nadia Comaneci told Reuters.

"How can someone her age dare to do that to their body?"

"You’ve got be a little bit crazy to do such a brave thing. Hats off to her. It’s amazing." 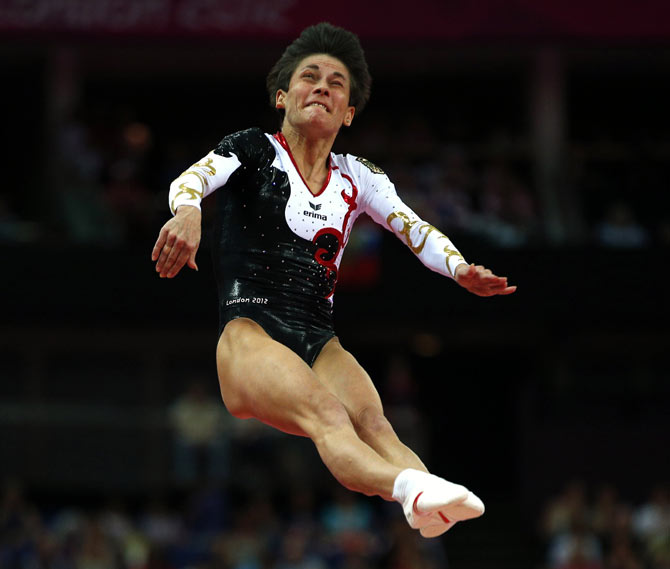 Following the break up of the Soviet Union, Chusovitina was a member of the Unified Team in 1992, represented Uzbekistan at the next three Olympics, then won a silver on the vault in Beijing in 2008 after switching allegiance to Germany. She has now gone back to her roots and will compete for Uzbekistan in Rio.

While a lifetime of dedication and pain has earned her nine world championship medals, including three golds, over the past quarter of a century, 1996 Olympic champion Kerri Strug cannot believe Chusovitina, who has a 16-year-old son, is still going strong since they both made their Olympic debuts at the Barcelona Games.

"Unbelievable. I have the utmost respect for her," Strug told Reuters.

"I mean she’s had a child, and to keep getting into a leotard and stay in such phenomenal shape. To be able to bear all that pounding over the years, I don’t know how she does it.

"Kudos to her for being so disciplined with her diet, staying lean and mean at that age. It only gets harder to compete with these youngsters but she’s doing it.

"In gymnastics, it usually one or two Olympics but seven? It’s just crazy and it’s amazing. Whether she wins any medals or not, it’s inspiring to people of all lifestyles to see somebody is able to do that."

And what do the vault specialist's current rivals think?

"It's so insane," summed up 2012 all-around champion Gabby Douglas.