The Indian team had won only one gold medal before this edition but Divya, Pinki and Sarita Mor won three on the opening day. Nirmala Devi came out second best.

Sakshi twice lost to Japan's Naomi Ruike -- in the opening round and the final -- to win her second silver at this event. She had grabbed a silver in 2017 also.

The Rio Olympic bronze medallist Sakshi, who has been struggling of late, lost her opening round 1-2 to Naomi and could not score a point in final, which she lost 0-2.

"She was not that strong but I just could not score many points against her. Initially I lost two points and that pegged me back," she said.

Sakshi overcame two weak opponents to eventually reach the final. She outplayed Korea's Ohyoung Ha in her second round, winning by technical superiority. In her semifinal against Uzbekistan's Nabira Esenbaeva, she led 5-0 but her rival pulled off consecutive two-point moves to make it 5-4.

Sakshi has been losing in closing stages of late but this time she managed to hold on to her narrow lead, surviving anxious last two seconds.

All eyes were on Vinesh, who yet again fell to Muakida to go out of the gold medal race but made a strong comeback to win then bronze medal play-off against Vietnam's Thi Ly Kieu, winning by technical superiority in the first period itself.

"Obviously I am not happy but I am making progress. It's not easy to beat experienced Japanese in this category. I have lost but I tried a few things and it worked a bit. Earlier I had not even scored a point against her but this time I got two. The gap is not much now, it's 70-100 between Mukaida and myself," Vinesh said.

Vinesh had lost twice to Mukaida in 2019 -- at World Championship and Asian Championships -- and the trend continued as the gritty Indian yet again struggled to break the strong defence of the Japanese.

In a tough opening round, Vinesh tried single leg attacks a number of times but every time Mukaida blocked her move and eventually got the upper body lock to subdue the home favourite.

Vinesh has won a medal at every Asian Championship since 2013.

Out of India's two brightest youngsters, it was Anshu who bagged a bronze while Sonam Malik (62kg) , who was pitted against some heavyweights lost her bronze medal play-off. 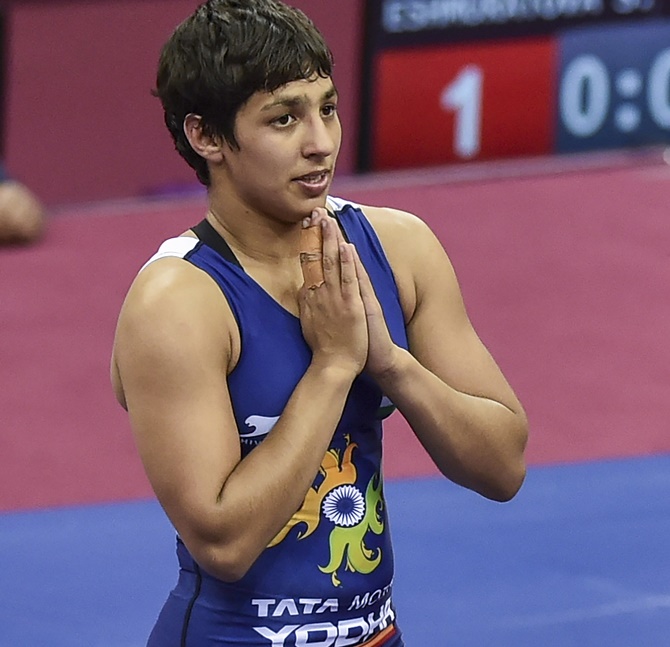 Anshu opened up her campaign against Kyrgyzstan's Nuraida Anarkulova, winning by technical superiority but was outplayed by reigning world champion from Japan Riskao Kawai.

She then beat Sevara Eshmuratova from Uzbekistan to win her first medal at senior level.

"I had nothing to lose and every thing to gain. I now know where I stand when I am competing against seasoned wrestlers in this category. I have got richer in experience," said the 18-year-old.

Sonam, who had defeated Sakshi in the trials, showed good tactical mind in her resounding win against Korea's Hanbit Lee and also in the 2-5 defeat against world bronze medallist Yukako Kawai.

Up against world champion Aisuluu Tynbekova, it was a tough ask for her to get bronze but she fought well before losing.

In the non-Olympic 72kg, Gursharanpreet Kaur Mongloia's Tsevegmed Enkhbayar in the third place play-off to win her second medal at this championship.

"I have lived a very hard life. I am single mother. It has been a very difficult journey for me. I am competing at Asian after eight years. The tears are of happiness. I want my kids to know how hard the life could be but you have to continue to fight," the 37-year-old said.