True success is measured by making the most of what one has.

This mantra was aptly followed by the Indian sailing team, which had to fight the odds and the association, to clinch a silver medal at the recently-concluded Asian Games in Guangzhou. 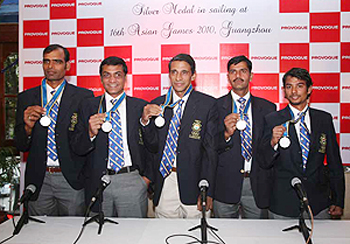 Tarapore expressed pride at the achievement of the 'Dream Team' despite the hurdles, but firmly trained his guns on the Yachting Association of India (YAI).

"When we started preparing for the Asian Games in 2007, we had three requirements from the YAI -- a good coach, 2 J-80 class boats and good pacers. But we were left disappointed on all fronts. We never received any boats or pacers and the person appointed to coach us was also a big letdown.

"The YAI selected UK's David Atkinson to coach our match racing team. But he was just a level three coach -- below national level. How could someone like that coach us? He trained with us for six weeks at tournaments prior to the Asian Games. But he was of no value to our team. Thank God he did not accompany us to Guangzhou (he was hospitalized for diabetes) or he would have spoilt our chances of a medal," said Tarapore, winner of a gold and three bronze medals in four previous Asian Games.

Tarapore was vocal about his disagreement of?the choice of coach.

"We only needed a coach for 30 days on a staggered basis. So we didn't see the need to pay Atkinson 5,500 pounds a month -- a sheer waste of tax payers' money. We had even recommended names of good foreign coaches who would come much cheaper. However, our pleading fell on deaf years," said Tarapore in his calm demeanor.

He stressed that the team won the silver medal in Guangzhou through sheer determination though it missed the services of a top coach.

"We took the decision to do a double jibe at a crucial stage in the third race against China after having lost the first two races. The double jibe was something we practiced over a thousand times in the last six months. The move clicked, we won that race and the next two to make the final," he said.

The Indian team was forced to play the final the same day as the semis. Forecasts had predicted that the wind conditions would not be suitable for sailing the next day.

"Just 15 minutes after our semis we had to take on the Japanese in the final. The Japanese had won their semis 90 minutes before the final. So they had ample time to rest before the final. What did us in was not physical stress but also mental stress. But we gave them a fight and won a medal and that is what matters," said Atool Sinha, who is serving as a Commander in the Navy.

Tarapore also revealed that just a week after returning home with the medal, the Match Racing Association of India -- headed by him -- was disaffiliated by the YAI.

"They gave us a frivolous reason for the decision, saying, each of the other associations affiliated to YAI represent one class of boats while we do not. The decision to remove us was taken in January and implemented on November 30.

"We were not disaffiliated before the Asiad because they didn't want to undo the good work we were doing," said Tarapore.

Looking forward to the next Asian Games is their target as the Olympics is only open to women sailors.

Fresh from this success, this 'Dream Team's' desire of conquering the waters of Incheon, South Korea at the 2014 Asiad is strong. Let's hope the Yatching Association of India helps the sailors keep the fire of success burning.