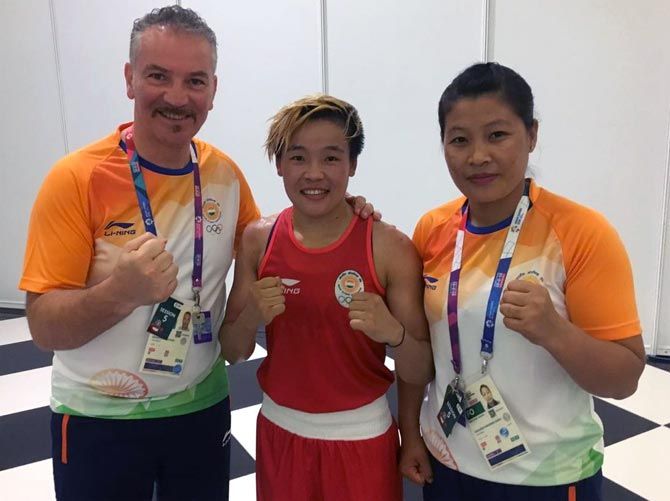 Former World silver-medallist Sarjubala Devi advanced to the quarter-finals but Manoj Kumar and Shiva Thapa went out after pre-quarterfinal losses in the Asian Games boxing competition in Jakarta on Sunday.

Sarjubala, competing in the flyweight 51kg category, defeated Tajikistan's Madina Ghaforova 5-0 in a bout which was more gruelling than what the scoreline might suggest.

"This is boxing, this is sport, even the best have bad days, and today we had a bad day for men. I am glad for Sarjubala and hopefully, the boys will also have a better day tomorrow," Indian boxing's High Performance Director and men's chief coach Santiago Nieva said.

Sarjubala, the reigning national champion, was up against a sprightly opponent and took a while to find her bearings in the bout.

The diminutive Manipuri, after being rattled a bit in the opening three minutes, came back strongly in the next two, hitting straight and hitting hard to get the judges' unanimous nod.

Earlier, two-time Commonwealth Games medallist Manoj was outwitted by Abdurakhamanov in both ring-craft and precision.

The Indian's punches lacked in power and he also struggled to find his way through Abdurakhamanov's shell guard in the first two rounds.

The Kyrgyz boxer dropped his guard in the final three minutes but dominated with his aggressive approach to come out trumps.

In the evening session, Shiva, a three-time Asian Championships medallist and a world championships bronze-winner, faced two knockdowns before the bout was awarded to Shan in the first round itself.