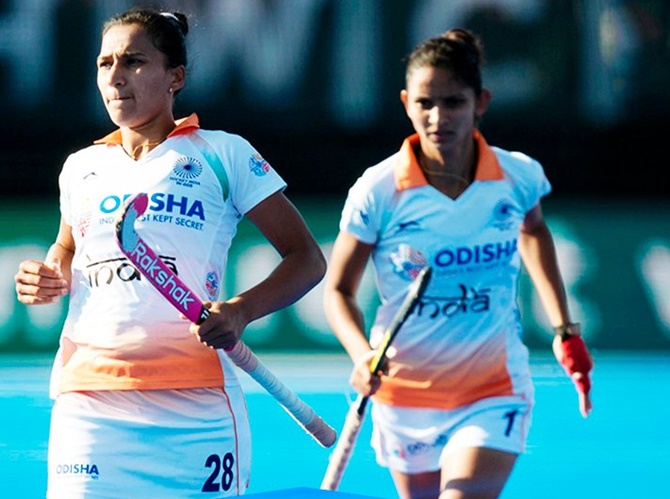 Skipper Rani Rampal scored a hat-trick as title contenders India outplayed Thailand 5-0 to storm into the semi-finals of the women's hockey competition at the 18th Asian Games in Jakarta on Monday.

After a barren and action-less first two quarters, the Indians got into the groove and scored five goals after the change of ends through Rani (37th, 46th and 56th minutes), Monika (52nd) and Navjot Kaur (55th) to register their fourth consecutive win.

With an unbeaten record under its belt, the Indian women's team finished on top of Pool B with 12 points from four wins ahead of defending champions South Korea, who they had defeated 4-1 in their penultimate pool encounter.

The first few minutes of the opening quarter saw Thailand maintain most of the possession but it was India who had an opening in the fifth minute when captain Rani's reverse shot from the right flank went just wide of the goal post.

India won their first penalty corner in the same minute, but the resulting try from Deep Grace Ekka was saved by a Thai defender.

The remaining minutes of the quarter saw both the teams battle for possession in the midfield with world number nine India creating a few opportunities but lacking in intensity and precision.

India got a couple of chances in the opening minutes of the second quarter as Rani took another shot which went wide, while Vandana Katariya was denied a shooting chance by Thai goalkeeper Alisa Narueangram, who was brilliant under the bar.

Rani was involved again in the 23rd minute as she made her way into the striking circle, wriggling past four Thai defenders and fired a ball across thegoal, but young striker Lalremsiami could not get her stick at the end of the pass as the scores remained 0-0.

In the 25th minute, India won their second penalty corner and it was Rani who took the shot but was once again denied by the Thai custodian.

Denied any goal by world number 28 Thailand in the first 30 minutes, the Indians came out all guns blazing in the third quarter and went on the offensive.

India kept up the pressure on the Thai defence in the following minutes and got their fourth penalty corner but once again Alisa came in between Gurjit and a goal.

India's consistent pressure bore fruit in the 37th minute when Rani scored from a rebound after Udita's initial try was saved by Alisa.

Thereafter, the Indians exerted constant pressure on their opponents and in the 46th minute, Rani once again found herself at the right place at the right time to stroke home from another rebound to double India's lead.

From there on, it was India all over as they attacked in numbers to catch the Thai defence off guard on three more occasions in the last 10 minutes of the game.

First Monika scored from a rebound in the 52nd minute after Deep's try from a penalty corner was denied by the Thai goalkeeper and then Navjot and Rani scored two beautiful field goals to seal the match for India.