An inexperienced Indian men's hockey team fought hard before going down to arch-rivals Pakistan 4-5 and slumping to their third defeat in the Asian Champions Trophy at Kakamigahara, Japan on Thursday. India have fielded 13 junior players in the squad to give them exposure ahead of next month's FIH Junior World Cup in Kakamigahara.

The Pakistanis stunned the Indian defence in as early as in the second minute with a field goal from Abdul Haseem Khan.

Six minutes later, Rohidas converted another penalty corner with a low drag-flick to give India a 2-1 lead.

Pakistan, however, equalised at the stroke of halftime through a penalty corner conversion by Mohammad Imran.

Pakistan made a strong start at the change of ends and surged ahead in the 36th minute through Mohammad Rizwan before India skipper Manpreet Singh made it 3-3 four minutes later with a fierce shot from top of the circle after being fed by Malak Singh.

Goals continued to rain as Mohammad Rizwan scored his second field goal of the day in the 44th minute to restore Pakistan's lead.

But India drew level once again when Malak scored from a field effort five minutes later before Mohammad Rizwan Junior scored the winner for Pakistan in the 53rd minute.

India will now play Malaysia in their last league match on Friday.

India had earlier lost 0-2 to China and 1-2 to hosts Japan before registering a 3-0 win over Oman in their previous matches in the tournament. 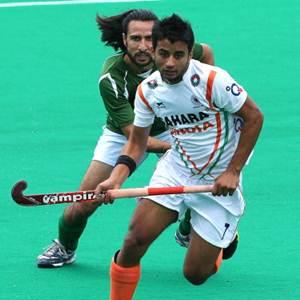