Dutee continued to enjoy her return to top flight athletics, by adding a 200m silver to the one she clinched in the 100m event 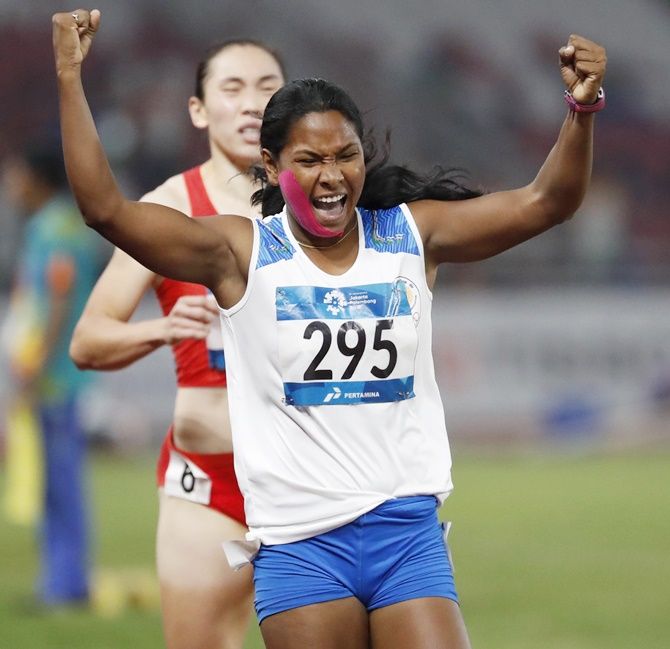 Heptathlete Swapna Barman added a dash of heroism to her historic gold medal, triple jumper Arpinder Singh personified the predictability that comes with a favourite tag, while sprinter Dutee Chand continued to rediscover herself as track-and-field remained India's happy hunting ground at the 18th Asian Games in Jakarta. 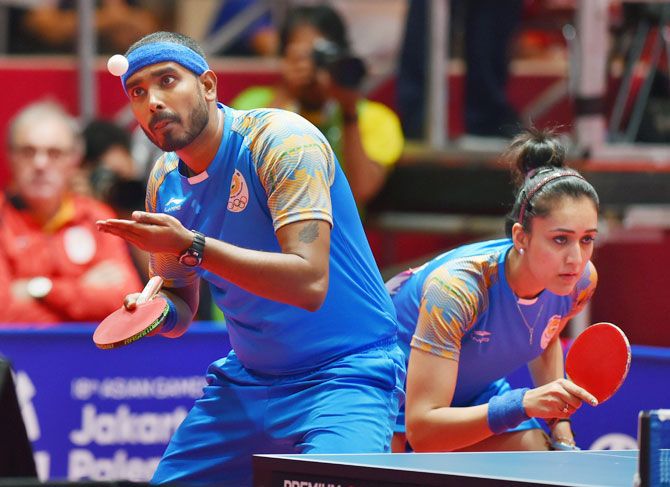 The surprise story of the day was table tennis where old warhorse A Sharath Kamal and new sensation Manika Batra broke new grounds, giving India a first ever mixed doubles medal at the Asiad -- a bronze.

As a result of these path-breaking performances, the country remained on course to better its previous edition's haul and tallied 54 medals -- 11 gold, 20 silver and 23 bronze.

Competing with a plastered face owing to a teeth injury, described as a a case of infection, the battle-hardened Swapna topped the overall standings to garb her maiden Asiad gold.

The daughter of a rickshaw puller who has been bed-ridden by stroke since 2013, Swapna logged 6026 points from the seven events competed over two days. She won the high jump (1003 points) and javelin throw (872 points) events and finished second-best in shot put (707 points) and long jump (865 points).

Her weakest events were 100m (981 points, 5th position) and 200m in which she finished seventh with 790 points. But the tremendous overall effort was enough to make her the first heptathlete to notch up a gold at the continental showpiece. 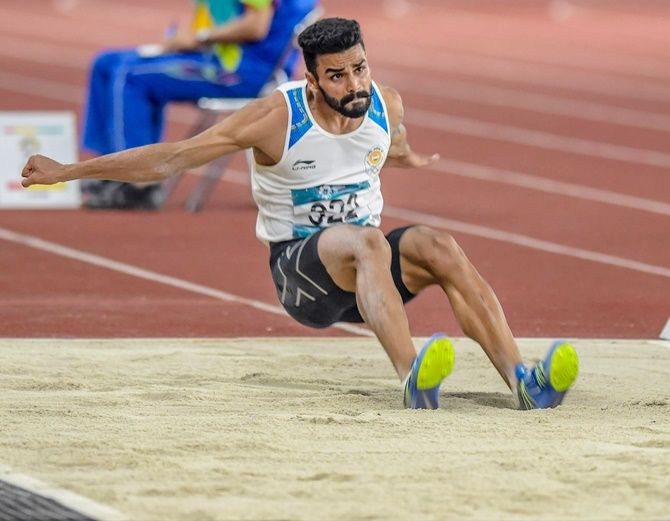 Another history-maker was Arpinder, becoming the first triple jumper in 48 years to fetch a gold after Mohinder Singh Gill (1970).

The athlete from Punjab bossed the finals, making the gold-winning jump of 16.77m in just his third attempt and was never really threatened by the rest of the field.

Then there was Dutee, continuing to enjoy her return to top flight athletics, by adding a 200m silver to the one she clinched in the 100m event.

Dutee was not allowed to compete at the 2014 Commonwealth Games as she was embroiled in a hyperandrogenism case, which eventually went in her favour at the Court of Arbitration for Sports (CAS).

"I have faced a lot since 2014. No one has gone through such a bad phase. I am glad that I could win two medal for the country. There is always this fear that it might come back. But more the fear, the harder I train," the diminutive runner said after finding her silver lining.

The Indian table tennis contingent's dream run also got better when Kamal and Batra, both Commonwealth Games gold-winners, exceeded their own expectations to win a historic mixed doubles bronze.

It was only on Tuesday that the Kamal-led men's team had secured a bronze, ending India's 60-year-wait for a maiden medal at the Asian Games.

on Wednesday, Kamal and Batra played four matches in a day and only the opener against Malaysia was comfortable.

"It has been an unbelievable campaign so far. Not even in my wildest dreams, I thought of winning a medal at the Asian Games. Now I have got that too. I am still pinching myself," said Kamal, who will also compete in the men's doubles and singles competiton.

The women's hockey team provided the perfect end to the day, by making the finals with a 1-0 win over China. The team is now assured of a better medal than the bronze it won the last time around.

Also on a roll were the squash players. In their best ever show at the Games, they were assured of two more medals after the men's and women's teams advanced to the semi-finals.

The men's defeated Thailand, while the women sailed past China, both winning by by an identical 3-0 margin. The squash players had claimed three bronze medals in the singles competition and with two medals assured in team events, they have exceeded their 2014 performance in terms of number of medals won.

There were mixed results in the boxing ring.

Star boxer Vikas Krishan (75kg) overcame a bleeding left eye to be assured of an unprecedented third consecutive Asian Games medal, while Amit Panghal (49kg) produced a power-packed performance in his quarterfinal bout to guarantee himself a maiden podium finish.

However, it was curtains for world silver-medallist Sarjubala Devi (51kg) after she lost her quarterfinal bout 0-5 to China's Chang Yuan. Her loss means that Indian women boxers would be returning without a medal from the Asiad for the first time since the event was added to the Games in 2010.

The overall haul from boxing is going to be just two this time, a massive drop from a gold and four bronze medals achieved in 2014.

There was no end to disappointments in judo, and sepaktakraw, where Indians failed to register any result of significance. After delivering a surprise silver and bronze yesterday, the Kurash contingent endured a disappointing day, failing to win.

Already out of reckoning, the Indian men's handball team ended its campaign on a positive note, defeating Indonesia in a group 3 main round match.