Three-time champions Pakistan became the first team to qualify for the semifinals of the Asia Cup hockey tournament after defeating Malaysia 4-1 in their second Pool A match in Ipoh, Malaysia on Sunday.

Pakistan are on top of Pool A with six points from two games ahead of Malaysia who have three points from as many games. 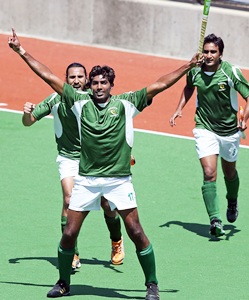 For the winners, all the four goals came through field efforts from the sticks of Muhammad Zubair (32nd), Muhammad Dilber (46th), Muhammad Waqas (60th) and Shafqat Rasool (67th). Malaysia's lone goal was scored by Muhammad Razie Abd Rahim in the 26th minute.

Pakistan next play Chinese Taipei on Tuesday, while Malaysia will be up against Japan on the same day.

Earlier, defending champions South Korea started their title defence with a resounding 8-0 win over Bangladesh in their first Pool B match.