National level volleyball player Arunima Sinha, who lost a leg after being pushed off a moving train, was on Sunday offered a government job by state Sports Minister Ayodhya Pal Singh.

"The Sports Minister met Sonu this morning and offered her a job in Sports Directorate or the Sports College," Deputy director (Sports) Anil Banoda said.

He said Arunima and her family members have accepted the offer stating that the athlete wants to continue her association with sports.

The announcement came ahead of the Union Sports Minister Ajay Maken's visit to CSM medical university to meet Arunima on Monday afternoon.

The 23-year-old lost her leg after being pushed from Padmavat Express near Bareilly on the night of April 11 while she was on her way to Gautam Buddha Nagar to appear in the CISF recruitment examination.

The police had lodged an FIR under section 307 (attempt to murder) and 393 (attempt to robbery).

She was earlier undergoing treatment at Bareilly district hospital where she was admitted on April 12. 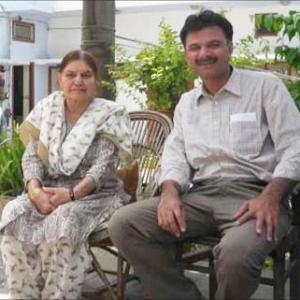 RSS says it is for 'amicable' Ayodhya solution