Arsenal's Premier League hopes ended on Sunday when Tamir Cohen scored a last-minute header to give Bolton Wanderers a 2-1 victory that left them nine points behind Manchester United with four games to play.

Bolton were unrecognisable from the team thrashed 5-0 by Stoke City in the FA Cup semi-finals a week ago and deservedly led 1-0 at halftime thanks to a header from on-loan Chelsea striker Daniel Sturridge.

Arsenal goalkeeper Wojciech Szczesny saved a weak Kevin Davies penalty at the start of the second half and moments later Robin van Persie shot home the equaliser from the edge of the box. 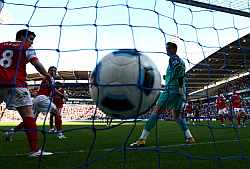 Arsenal piled on the pressure but were caught out when Cohen, on the pitch only for five minutes, powerfully headed home a corner.

Manchester United, who beat Everton 1-0 on Saturday and visit Arsenal next Sunday, lead the way with 73 points.

Manchester City, who visit Blackburn Rovers on Monday, are fourth on 56 with Tottenham Hotspur on 55.

© Copyright 2020 Reuters Limited. All rights reserved. Republication or redistribution of Reuters content, including by framing or similar means, is expressly prohibited without the prior written consent of Reuters. Reuters shall not be liable for any errors or delays in the content, or for any actions taken in reliance thereon.
Related News: Arsenal, Bolton, Chelsea, Manchester United, Tamir Cohen
SHARE THIS STORYCOMMENT
Print this article