Antonio Conte's first Premier League game in charge of Tottenham Hotspur ended in a scrappy 0-0 draw at Everton on Sunday, as a crucial VAR intervention helped his team scrape a point.

The pivotal moment in a game of few clear chances came just past the hour mark when referee Chris Kavanagh awarded a penalty against Tottenham keeper Hugo Lloris for a foul on Richarlison but changed his mind after checking the pitchside monitor.

Tottenham substitute Giovani Lo Celso almost won it for Tottenham late on with a shot against the post, but a draw was just about a fair result for the two out-of-form sides.

Everton ended a feisty match with 10 men after Mason Holgate was sent off in stoppage time for a wild tackle on Spurs midfielder Pierre-Emile Hojgberg.

Conte will take some satisfaction from Tottenham's first league clean sheet for more than two months as the Londoners drew for the first time this season.

Heading into the international break Tottenham are in ninth place with 16 points from 11 games with Everton, who ended a run of three successive league defeats, a point worse off.

Former Juventus, Chelsea and Inter Milan manager Conte said in the build-up to the game that the Tottenham job represented a big challenge and that improvements were needed on the pitch.

After watching his side at Goodison Park nothing would have changed those sentiments, although he would have been impressed with his side's attitude which was far more tenacious than in some of the limp displays under Nuno Espirito Santo.

While Tottenham defended ruggedly at times, their attack functioned only sporadically with striker Harry Kane again looking well below his best as the visitors failed to manage a single attempt on target.

That said, Tottenham did have chances.

Emerson Royal headed over in the first half while seconds before halftime Sergio Reguilon scooped a half volley over the bar after being picked out by Harry Kane.

Everton were the better side after the break and thought they had been awarded a penalty when Richarlison broke into the area and went flying in a collision with Lloris.

Kavanagh immediately pointed to the spot but after consulting with the VAR official via his earpiece, he trotted over to view the incident on a monitor.

The video was inconclusive with Lloris seemingly making minor contact with the ball before taking out the Brazilian striker, but to loud boos Kavanagh cancelled the spot kick.

After that it was a messy affair with tempers fraying and Lo Celso's shot against the post was a rare moment of quality.

West Ham United showed that their place in the Premier League's top four was fully warranted as they outmuscled Liverpool for a memorable 3-2 victory at a rocking London Stadium on Sunday.

Victory for high-flying West Ham ended Liverpool's club record 25-match unbeaten run in all competitions and lifted them above Juergen Klopp's side into third place in the table.

What always looked like a tough fixture for Liverpool began badly when keeper Alisson, who endured a difficult afternoon, flapped a cross into his own goal after four minutes.

Liverpool were never allowed to find any fluency but they were level by halftime thanks to a moment of magic from Trent Alexander-Arnold.

Those expecting Liverpool to find another gear after the break were left disappointed as West Ham took the game by the scruff of the neck.

Craig Dawson hit the bar for West Ham early in the second half as Liverpool wobbled at the back, before Pablo Fornals restored West Ham's lead in the 66th minute before Kurt Zouma rose to head in West Ham's third in the 74th minute.

Substitute Divock Origi gave Liverpool a lifeline with a shot on the turn in the 82nd minute and Sadio Mane should have levelled in stoppage time but the hosts clung on for a victory that would be celebrated into the night by the home fans.

West Ham's fourth consecutive league win moves them to 23 points from 11 games with Juergen Klopp's side one point behind them and the Hammers head into the international break just three points behind leaders Chelsea.

It was a day to forget for Liverpool and especially Alisson.

The game was only four minutes old when he flapped at a Fornals corner under pressure from Angelo Ogbonna and the ball ended up in the net. He hoped for a reprieve via a VAR check but the goal was rightly allowed to stand.

Liverpool were ragged and a little lucky not to be down to 10 men after Diogo Jota caught Ogbonna with his elbow, forcing the West Ham player to be substituted.

But they got back into the game when Alexander-Arnold played a short free kick to Mohamed Salah who then stopped it for the English defender to curl past Lukasz Fabianski and temporarily silence the home fans.

Fabianski made a crucial save from Mane's volley after the break and minutes later West Ham went back ahead as Fornals went clean through and beat Alisson with a low shot that the Brazilian stopper might have saved.

When Zouma headed in shortly after for his first West Ham goal, again with Alisson found wanting, it felt like the roof was coming off the former Olympic Stadium. Arsenal closed in on the Premier League top four after a second-half goal from Emile Smith-Rowe gave them a 1-0 home win over Watford on Sunday in manager Mikael Arteta's 100th league and cup game in charge.

The result lifted Arsenal lifted one place up to fifth on 20 points from 11 games, behind fourth-placed West Ham on goal difference with the Hammers at home to third-placed Liverpool in the 1530 GMT kick-off.

Smith-Rowe netted Arsenal's 100th league goal under Arteta as he drilled in a low shot from 18 metres after striker Pierre-Emerick Aubameyang had missed a first half penalty for the home side, who also had two goals ruled out for offside.

Bukayo Saka's early effort was disallowed and Watford goalkeeper Ben Foster smothered Aubameyang's 35th-minute spot kick before he also kept out a close-range Gabriel header with a superb reflex save.

But Foster was powerless in the 56th minute when Arsenal defender Ben White surged forward after winning possession in midfield and teed up Smith-Rowe, who found the back of the net with a first-time shot.

Aubameyang had a 73rd-minute goal chalked off and Joshua King missed Watford's solitary chance in the 86th before the visitors had Juraj Kucka sent off for a second yellow card after he fouled Arsenal's left back Nuno Tavares. 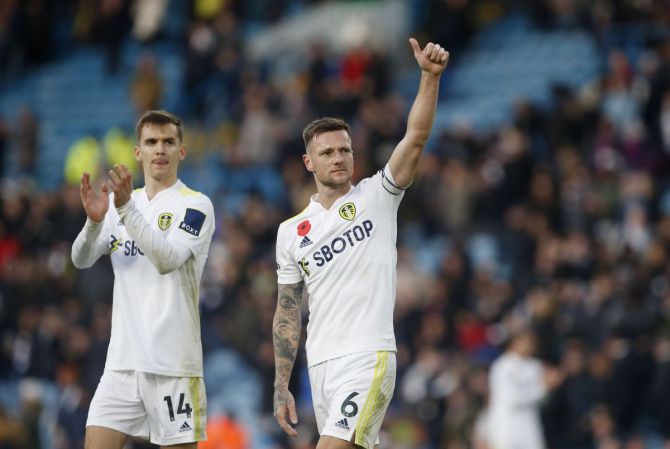 Leeds United winger Raphinha's superb free kick was cancelled out by Leicester City forward Harvey Barnes in an entertaining 1-1 draw at Elland Road in the Premier League on Sunday.

Brazilian Raphinha fired Leeds ahead in the 26th minute of a breathless opening half with a vicious low free kick that beat a diving Kasper Schmeichel and crept into the bottom left corner before Leicester hit back in style two minutes later.

Barnes darted into the penalty area and unleashed a curling right-footed effort from a tight angle that gave Illan Meslier no chance in the Leeds goal to equalise and silence the raucous home crowd.

Leeds spurned a great chance to go ahead shortly after the break, as an unmarked Jack Harrison failed to keep his effort from going over crossbar from point-blank range following a flick on from fellow midfielder Kalvin Phillips.

The hosts continued to dominate possession and Rodrigo was next to go close as the Spanish forward lashed his volley into the side netting after meeting Stuart Dallas's probing cross from the right.

Leicester's Ademola Lookman tapped in from close range in the 67th minute but the effort was disallowed after the intervention of the Video Assistant Referee as the forward was deemed to be offside when Jamie Vardy headed the ball to him.