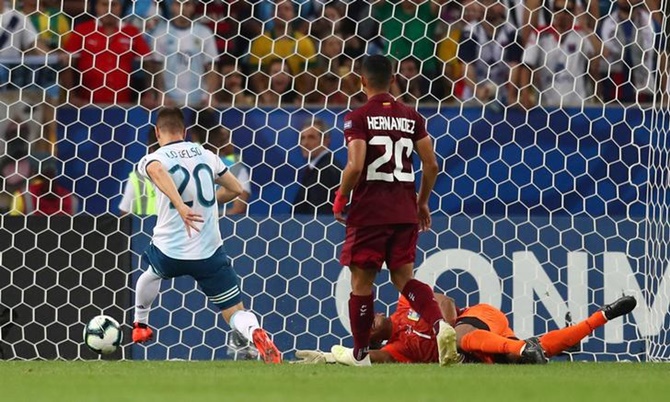 Argentina can look forward to a mouthwatering Copa America semi-final clash with Brazil after delivering a much-improved display to beat Venezuela 2-0 in the quarter-finals in their first game at the Maracana since losing the 2014 World Cup final.

Striker Lautaro Martinez scored for the second game running to put Argentina in front in the 10th minute with a clever back-heeled finish, diverting in a shot from Sergio Aguero following a corner swung in by captain Lionel Messi.

Lionel Scaloni's side had to weather a series of attacks from Venezuela in the second half and it took a strong save from Franco Armani to prevent Ronald Hernandez from levelling.

Substitute Giovani Lo Celso scored Argentina's badly-needed second goal in the 74th minute, passing a loose ball into an empty net after another shot from Aguero squirmed through the hands of Venezuela goalkeeper Wuilker Farinez.

Lo Celso's tap-in sealed a therapeutic win for Argentina in their first game back at the iconic Maracana stadium since their 1-0 extra-time defeat to Germany, which began a cycle of three consecutive losses in major finals.

"We knew it wasn't going to be easy and we're happy to have reached the semi-finals. Even though we made it hard for ourselves, here we are," Argentina striker Aguero told reporters.

"Argentina-Brasil causes a lot of excitement around the world, it's a game you don't get to play every day but we've got here and we'll try to do as well as possible." 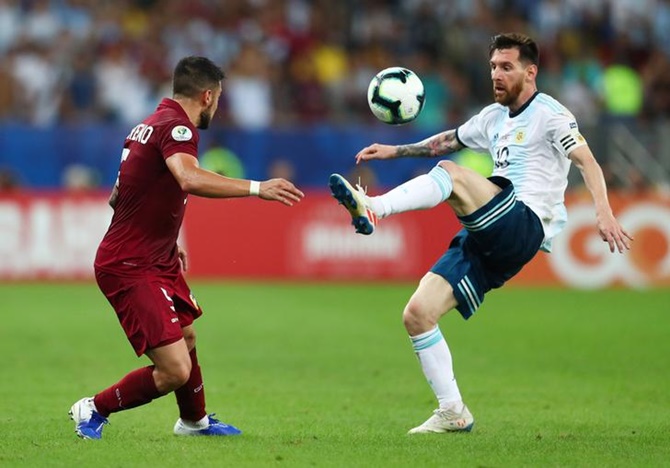 Argentina had scraped into the last eight with a nervy 2-0 win over Qatar in their final group-stage game after losing to Colombia and drawing with Paraguay, but they expected a sterner test from Venezuela.

Venezuela once lost 11-0 to Argentina in the 1975 Copa America but they have made remarkable advances in recent years despite a backdrop of political turmoil, reaching the 2017 under-20 World Cup final under current coach Rafael Dudamel.

They were unbeaten in their last three games with Argentina which included a resounding 3-1 win in a friendly in March, and captain Tomas Rincon said ahead of the game it was time his side "made a statement".

But they failed to live up to the hype and barely got into Argentina's area before halftime.

"We weren't at the level we're capable of, we struggled to get into the game and we couldn't offer the physical and mental intensity that was needed," said Dudamel.

"We worked hard but we needed to have cooler heads, we spent a lot of energy on battling for the ball but didn't manage to create much. We leave here feeling bitter but we know we did ourselves proud."

Argentina could have got a second goal early in the second period when Martinez galloped onto a through ball from Leandro Paredes but his shot clipped the crossbar.

Venezuela then took the initiative with a spell of sustained pressure but Argentina showed a resilience and sense of maturity that was lacking in their shabby displays in the group stage.

Their reward is a first Copa America clash with eternal rivals Brazil since the 2007 final, which they lost 3-0.

The tournament hosts edged Paraguay in a penalty shootout following a goalless draw on Thursday. 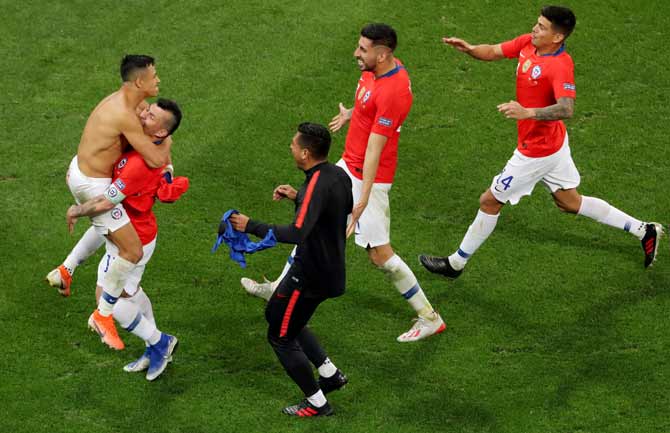 Reigning champions Chile advanced to the semi-finals of the Copa America on Friday after beating Colombia 5-4 in a penalty shootout following a 0-0 draw at the Corinthians arena.

Chile will face either Uruguay or Peru in Wednesday’s semi-final in Porto Alegre. The other semi is between hosts Brazil and Argentina.

Chile had beaten Argentina in the last two finals of the tournament on penalty kicks and they gave Colombian goalkeeper David Ospina no chance on Friday.

"I think we had opportunities (during the game)," said Chile's Charles Aranguiz. "We didn’t take them and we had to do it on penalties.

"Our team is confident when it comes to penalties, we have won two finals on penalties. So that gives us energy."

The kick-off at the Corinthians arena was delayed by 20 minutes after the Chilean coach got stuck in Sao Paulo’s notorious traffic, keeping more than 40,000 fans waiting.

Tempers frequently flared in a match with 35 fouls but there was no lack of quality on show as both sides created chances.

Chile were unlucky not to win in regulation time, with Aranguiz in the first half and Vidal in the second having goals chalked off after video assistant referee (VAR) reviews.

"It’s difficult because you’re going at 100 miles an hour and then they annul two goals," said Vidal. "But we kept our heads and won it on the penalties.

© Copyright 2020 Reuters Limited. All rights reserved. Republication or redistribution of Reuters content, including by framing or similar means, is expressly prohibited without the prior written consent of Reuters. Reuters shall not be liable for any errors or delays in the content, or for any actions taken in reliance thereon.
Related News: Argentina, Giovani Lo Celso, Venezuela, Sergio Aguero, Copa America
SHARE THIS STORYCOMMENT
Print this article 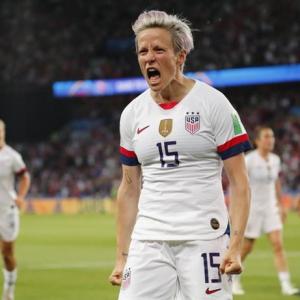 PICS: Rapinoe double takes US past France into semis 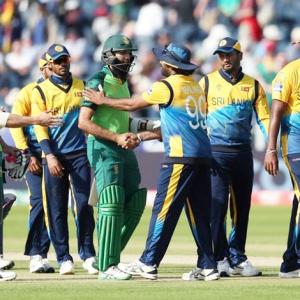 Karunaratne frustrated as SL's hopes hang by a thread