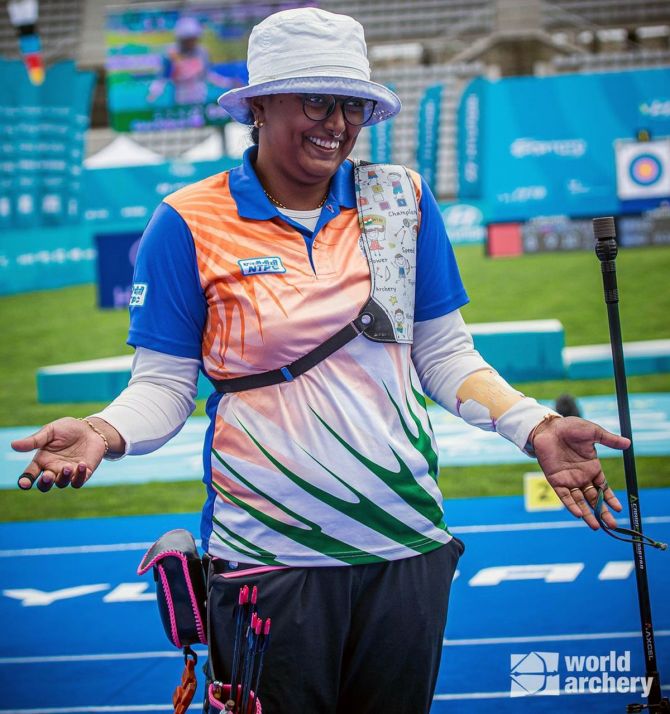 Star Indian archer Deepika Kumari on Monday regained the World No 1 ranking following her hat-trick of gold medals at the World Cup Stage 3 in Paris.

The 27-year-old from Ranchi, who had achieved the top spot for the first time in 2012, on Sunday claimed gold medals in three recurve events -- women's individual, team and mixed pair.

"This is going to take Deepika to the number one spot in the world rankings on Monday," World Archery had tweeted on its official handle after Deepika's gold rush.

Deepika first combined with Ankita Bhakat and Komalika Bari to notch up the women's recurve team gold with a comfortable win over Mexico.

She then paired up with husband Atanu Das and the couple from a 0-2 deficit to down the Netherland's Sjef van den Berg and Gabriela Schloesser 5-3 for the gold medal. 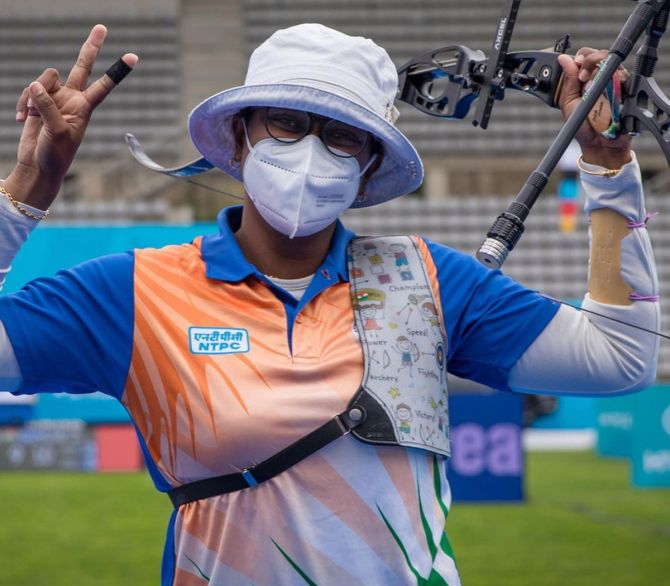 IMAGE: Deepika Kumari will be the only Indian woman archer to represent the country at the Tokyo Olympics next month. Photograph: Kind courtesy Deepika Kumari/Instagram

The Ranchi archer then blanked 17th ranked Russian Elena Osipova 6-0 to cap a perfect three out of three in the recurve women's section, her fourth individual World Cup gold medal.

Overall, she has won nine gold, 12 silver and seven bronze medals in the World Cup.

"This is the first time I've won all three medals in a World Cup. I'm really happy but at the same time, I've to continue improving as we have some very, very important competitions lined up," Deepika had said after her triumphs.

Deepika had become only the second Indian woman after Dola Banerjee to grab the numero uno status in June, 2012 after claiming her first individual recurve World Cup gold medal at Antalya, Turkey.

She will be the only Indian woman archer to represent the country at the Tokyo Olympics next month.