Rising Indian golfer Anirban Lahiri will feature in this week's US $2.5 million Maybank Malaysian Open as the newest Asian Tour champion to emerge from the sub-continent.

Lahiri fulfilled his potential as one of India's rising stars when he won the Panasonic Open (India) by defeating countryman Manav Jaini and Singaporean veteran Mardan Mamat in a three-way play-off at the Delhi Golf Club on Saturday.

The victory installed Lahiri as one of the players to watch out for at the Kuala Lumpur Golf and Country Club this week. Lahiri's success is the second triumph by an Indian golfer in the past two months on the Asian Tour, following SSP Chowrasia's success at the season-opening Avantha Masters on home soil in February.

"I've been a professional for a few years and it was a matter of learning and gaining experience for me. I was finding my way and learning how to handle everything else outside of the golf course. Once I got a grasp of that, I was concentrating on playing my best, one shot at a time," said the 23-year-old, who has notched eight top-10s on the Asian Tour since 2009.

Lahiri said winning his first Asian Tour title on home soil was the icing on the cake.

"This is really a special feeling for me. Somebody once told me that if I could win at the Delhi Golf Club, I would probably be laughing as I have had such a bad record here. I guess the joke is on them now," he added.

The career breakthrough, which was worth US $47,550, pushed Lahiri up to fifth place on the Asian Tour Order of Merit with a season haul of US $57,720.

Chowrasia maintained his stranglehold on the Order of Merit where he has a comfortable lead with his earnings of US $410,077. Another Indian, Sujjan Singh sits in second place on US $97,326.

Kiradech Aphibarnrat of Thailand, who won at the SAIL Open in India last month, is third on US $72,833 while countryman Chinnarat Phadungsil is fourth on US $72,269.

This week, the Asian Tour will travel to Malaysia for the Maybank Malaysian Open. The US $2.5 million showpiece will start at the Kuala Lumpur Golf and Country Club on Thursday. 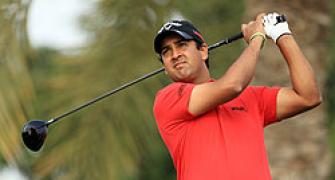