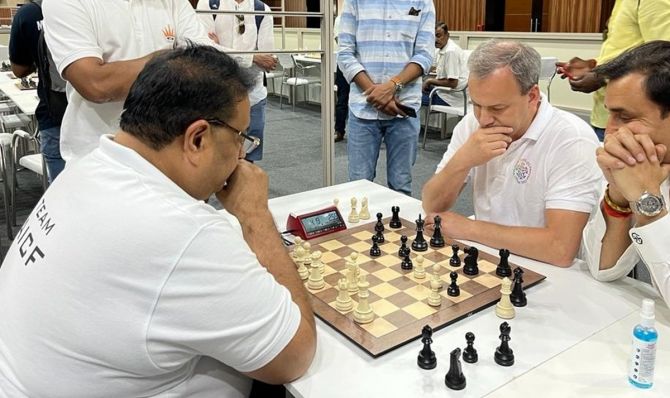 India's top-ranked chess player P Harikrishna on Tuesday said while legendary Viswanathan Anand's absence from the Indian team will make a big difference, the young players are ready to carve out a niche for themselves at this year's Chess Olympiad.

Five-time world champion Anand decided not to participate this time but he will be guiding the Indian team at the showpiece event to be held from July 28 to August 10.

"India has a very good team this time around. Obviously, not having (Viswanathan) Anand is going to make a big difference. That said, this side has a perfect mix of young and experienced players and we are capable of doing really well," said Harikrishna during a virtual press conference.

The 36-year-old, who is currently in the form of his life, having emphatically won the Prague Chess Masters last month, said the victory will give him an enormous amount of confidence before the showpiece event.

"The win at the Prague Masters could not have come at a better time. I hope to continue the same form and emulate my performances for India this time and contribute to the team's success," Harikrishna said.

"This will be my 10th Chess Olympiad appearance since 2000. It has been a memorable journey so far and a sheer honour to represent my country for so long. As a senior player, I have a big responsibility and, as always, I am geared up to give my best for my country," he added.

Treating this Olympiad as any other Olympiad

For the first time, India will be hosting the showpiece event, featuring as many as 343 teams from 187 countries.

Harikrishna said while there are expectations, the Indian contingent is not under any pressure.

"There is no such pressure at all. We are confident of bettering our performance than what achieved in the last Olympiad," Harikrishna said.

"In fact, it will be a great experience to playing in front of the home fans. The Chess Olympiad is one such event, that even if you have really well in the last four editions, it does not guarantee you with any hope in the current edition.

"So, keeping that in mind, while we are really confident of doing well this time, we are also treating this Olympiad as any other showpiece event (Olympiad) of the past," he added.

Not thinking too much about medals

India, seeded number two at the event, will be fielding a record total of 30 players across six teams (three in open and three in women) for the first time and all 15 players in the Open team are Grandmasters.

However, Harikrishna said despite the potential of the players to make it big this time, the Indian contingent is not thinking too much about medals.

"There are 10-15 top countries and we are aware of that. Right now, we are fully focused on playing well as a team. Frankly, if we do not play well, we would not be able to win any medal. So, we are not thinking about the medal chances. Our goal is to give our best in every game we play in the tournament," he said.