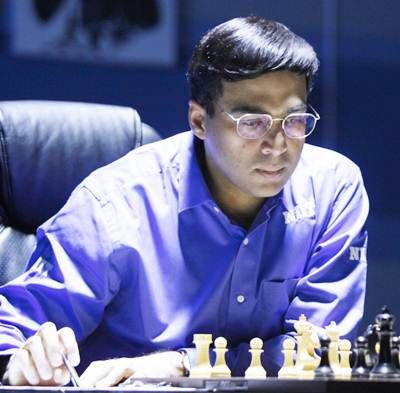 Five-time world champion Viswanathan Anand played out an easy draw with Sergey Karjakin of Russia in the fifth and final round to win the Classical section of Zurich Chess Classic on Thursday.

Awarded two points for a victory and one for a draw under new rules in place in the event, Anand tallied seven points, winning two and drawing three games, in the six-player round-robin. It also meant a much-needed recovery in ELO points after losing heavily in the preceding Grenke Classic tournament.

Hikaru Nakamura of the United States finished a clear second, a full point behind Anand after settling for a draw with Levon Aronian of Armenia. The third game of the fifth and final round in the Classical format was also drawn between Russian Vladimir Kramnik and Fabiano Caruana of Italy.

Kramnik finished third, having drawn all his five games while Aronian, Caruana and Karjakin were tied fourth on four points each.

The battle now shifts to the rapid chess format where all players play once more against each other in the same day.

There are five more rounds remaining to decide the overall winner but in rapid chess each win will be worth only one point and a draw will just earn half a point.

This effectively means the trio of Aronian, Caruana and Karjakin are out of title contention barring a huge turnaround in fortunes.

Kramnik, too, is two points behind Anand and it seems unlikely that the Russian can make a match of it either.

Nakamura, however, might fancy his chances under the faster version of the game. However, in the blitz tournament played on the first day to determine the colours of the players, the American had finished out of top three.

Anand played the reverse closed Sicilian as black and was not troubled at all.

The Indian ace gave up the Bishop pair early in the opening to get an active position and Karjakin had to return the favour to maintain the balance. The middle game saw pieces changing hands at regular intervals and the ensuing endgame was just level.

The draw was agreed to in 42 moves.

Nakamura went for the Anti-Berlin, where he played risk free but also without many chances. As is the nature middle games arising out these setups, the King file paved the way for exchanges and even though Aronian was slightly worse, it was not difficult to keep the position together.

Caruana tried the Italian opening against Kramnik but the Russian was well armed. Sacrificing a pawn in the middle game, Kramnik liquidated in quick time to get an equal position and the peace was signed in just 28 moves.

After some exciting chess in the first four days, there was a certain lull on the final day of Classical as those with white played safe. However, much action is promised on the final day with five rounds of rapid chess.