Felix to run 400m and relays at World Championships

Olympic 200 metres gold medallist Allyson Felix has chosen to run the 400 metres at next month's world championships, her coach told Reuters on Wednesday. 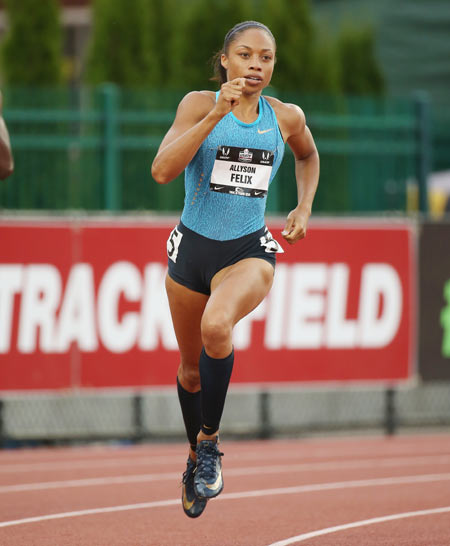 "It's more of a challenge for us," Kersee added when asked why the longer race.

Felix will also compete in both the 4x100 and 4x400 metres relays in Beijing, Kersee said.

"Excited to step it up and challenge myself next month," Felix said on her Instagram account along with a picture of her training and the words "Getting some 400 work in to get ready for worlds."

Felix currently ranks as the year's fourth fastest at 400m, but the two faster Americans on the list, Francena McCorory and Sanya Richards-Ross failed to make the U.S. team.

Asked if Felix would consider doing both sprints at the 2016 Rio Olympics, Kersee said: "Yes.

"That would be the crowning point of her career."

But like Beijing, the challenge would be difficult, and most likely would require a schedule change.

Felix would be required to run the first round of the 200m 75 minutes before the 400m final under the current schedule.

The precedent is there, he said, noting both American Michael Johnson and France's Marie-Jose Perec won 200-400m doubles at the 1996 Olympics.

Not to change Rio's timetable, "would be to deny an athlete realistically capable of winning four gold medals," Kersee said.