'I never knew what an Olympics was. I wanted to become a sportsperson to travel in an aeroplane. If you can represent India, you can board a plane and fly.' 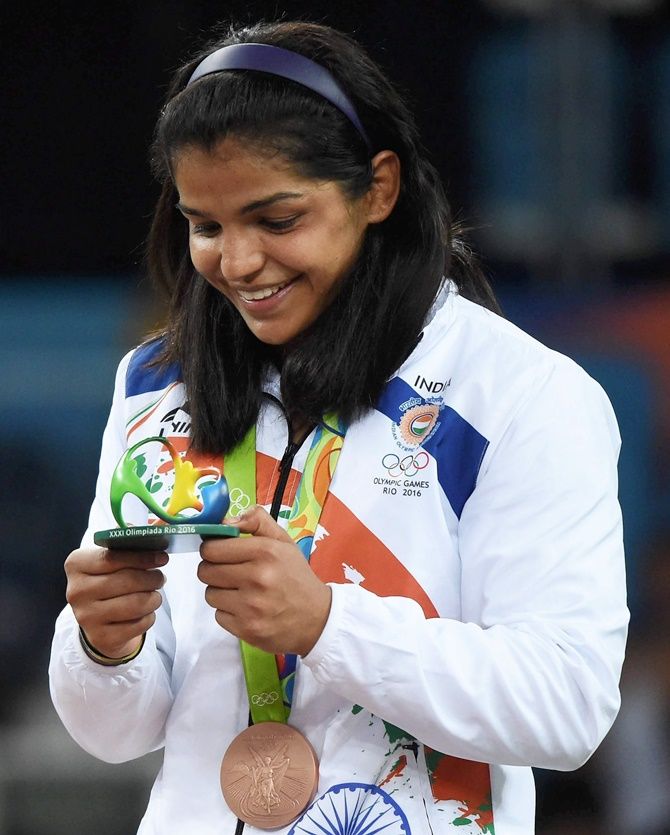 From yearning to fly in an aeroplane as a kid to clinching a bronze medal at the Olympics, Haryana wrestler Sakshi Malik has come a long way in her fairy-tale journey to etch her name in the country's sporting history.

Born into a humble family in Mokhra village near Rohtak, she tried playing kabaddi and cricket in her childhood but wrestling became her favourite sport after she started "winning bouts". But little did she and her parents know at that time that one day she would become the first woman wrestler from the country to win an Olympic medal.

On the night of Wednesday, August 17, Sakshi ended the country's painful wait for a medal at the Rio Olympics by clinching the bronze medal in the 58kg freestyle category, pulling off a sensational 8-5 victory over Aisuluu Tynybekova of Kyrgyzstan in the play-off bout.

‘I never knew what an Olympics was’ 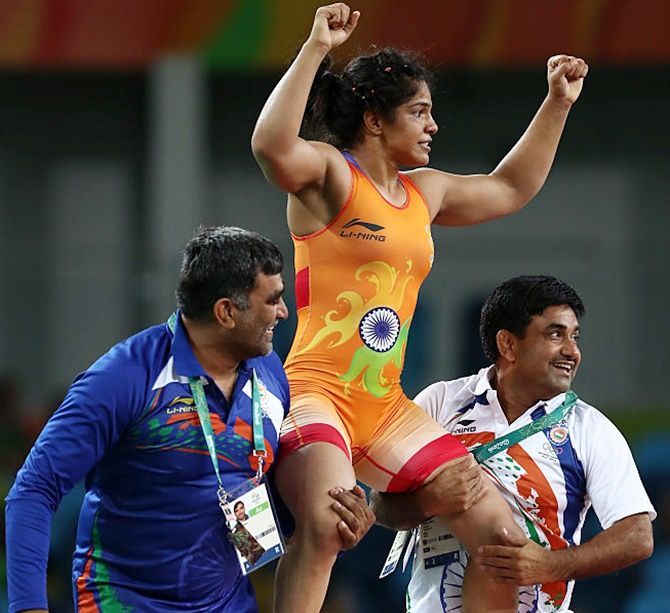 The 23-year-old wrestler is only the fourth woman athlete from India to win an Olympic medal.

Her bronze is the country's fifth medal overall in wrestling at the quadrennial Games.

It was a dramatic victory in the do-or-die bout on Day 12 of the Games, as she fought back from 0-5 down.

"I never knew what an Olympics was. I wanted to become a sportsperson to travel in an aeroplane. If you can represent India, you can board a plane and fly," Sakshi said.

Her elder brother was named after cricket icon Sachin Tendulkar

Sachin, who is two years older to her, would ask Sakshi to play cricket, but she would often say 'no' and stare at the sky when aeroplanes flew above. 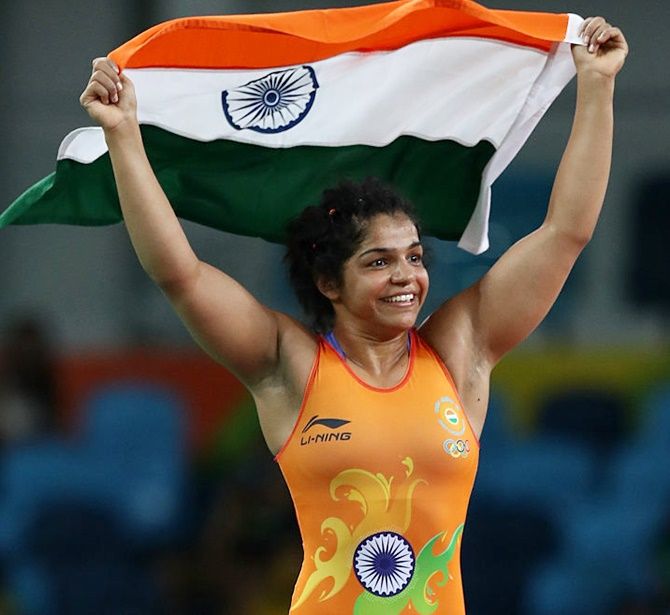 Her family always supported her in the pursuit of her dream.

"Parents never forced me; they supported me well in wrestling. Now when I spoke to them briefly after winning the bronze they started crying in joy. I told them, it's time to celebrate," revealed Sakshi.

It was a defining moment for India at the Rio Games when Sakshi was chaired by her coach, Kuldeep Malik, as the duo did a lap of honour before she went on her knees with the tri-colour wrapped around her and a packed hall at the Carioca Arena 2 gave her a standing ovation.

"It was a dream come true for me and I had already pre-planned to celebrate this way," said Sakshi, about winning the bronze medal.

‘Struggled’ to win a silver at the Commonwealth Games in Glasgow

Her toughest phase was when she "struggled" to win a silver at the 2014 Commonwealth Games in Glasgow.

"Everyone was getting medals. Such was the pressure that I thought it would be difficult to return home without a medal. I was under much less pressure here (Rio). Haar gaye toh kya ho jayega; lekin jeet gaye toh kya ho jayega (What would happen if I lost or won). I just had a free mind. I did not fight with pressure, and it helped."

From being an underdog to winning India the elusive medal at Rio, Sakshi acknowledged her life will now change forever.

"I know my life has changed now. I'm not able to see it now, but I think after I return home it will be different life altogether. Din raat ka change hone wala hai (The difference will be like day and night)," she said.

The Rohtak-to-Rio journey was 12 years of struggle and hardship for Sakshi, who was often overshadowed by the Phogat sisters.

"It felt strange. Like in the camp for Bulgaria and Spain, there were all Phogats and I was the only Malik in between them. But I did not mind... It was Geeta didi who showed us the way in 2012," she says about Geeta Phogat's path-breaking Olympic qualification in London 2012. 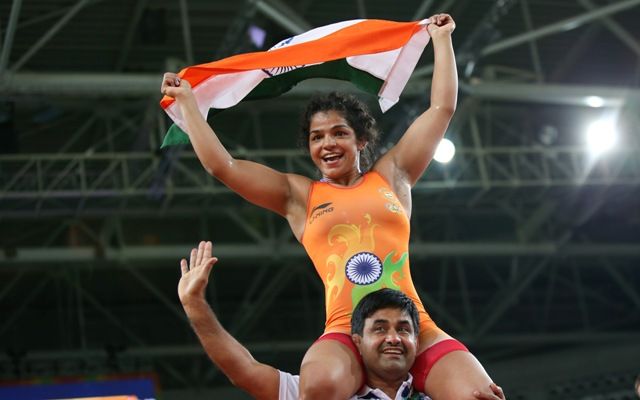 Sakshi's first international success was a bronze at the 2010 Junior World Championships in the 59kg category.

Four years later, she won a gold at the Dave Schultz International Wrestling Tournament in the 60kg, and the biggest moment of her career was at the Glasgow Commonwealth Games in 2014 where she won a silver medal.

"When I had returned home after winning the Commonwealth Games medal, everyone was after me and I could not sleep well.

"Every time I fell asleep, my brother or mother would tell me 'get up, you've to give interviews, people are waiting'. But I enjoy it; not everyone gets a chance of this type," she admits.

Two months later, Sakshi crashed out in the World Wrestling Championships the quarter-finals in Tashkent, finishing a poor eighth. But she came back strongly and won a bronze at the Asian Championships in Doha 2015.

It was only in May this year that she qualified for the Rio Olympics after making the final of the Olympic Qualifiers in Istanbul, where she lost to Russia's Valeriia Koblova, who defeated Sakshi in the quarter-finals.

It was only after she made the cut Sakshi was included in the Target Olympic Podium scheme as she did some training in Bulgaria and Spain.

‘Have not eaten aloo parantha, kadhi chawal for ages’

A daily routine in Sakshi's is 500 sit-ups and intensive training. At the moment, though, the training can stop.

She says she would love to gorge on her favourite aloo parantha and kadhi chawal.

"It feels like I've not eaten aloo parantha, kadhi chawal for ages now. I was mostly on a liquid, carb-free diet. Now I can relax," she added.

Sakshi is not into movies or chilling out with friends. For her, it's about sleep and spending some quiet time at home, maybe watching television.

"I just want to lead a peaceful life. I don't like to travel around or going out for movies. I want a job where I can be at peace. I've achieved all this because of my struggle for 12 years. Peace is all what I need; that's enjoyment for me."

But this is just the beginning for Sakshi.

Ask whom she will first give the prized medal to after returning to Delhi, and her reply is: "This medal is for everyone in my country. This medal belongs to you, whoever it is... I will say, see 'I've made it'."