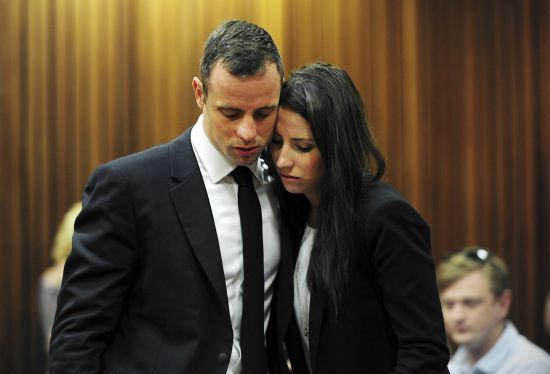 Judge Thokozile Masipa, who originally found Pistorius guilty of South Africa's equivalent of manslaughter, will re-sentence the Paralympic champion at a later date.

In South Africa, a murder conviction usually carries a minimum sentence of 15 years, although Pistorius' lawyers are likely to argue that his physical disability and mental stress should be considered as mitigating circumstances.

Pistorius was released under house arrest on October 19 after serving less than a year of his original sentence, in line with South African guidelines that say non-dangerous prisoners should spend only one-sixth of a custodial sentence behind bars.

A timeline of the life and trial of Pistorius shown below
Born on
November 22, 1986 in Johannesburg
Legs amputated
Born without fibulas, Pistorius has both legs amputated below the knees before turning one-year-old.
Prosthetic legs
After learning to walk on prosthetic legs, Pistorius becomes a keen sportsman in high school, turning to sprint training in 2003.
Carbon fibre prosthetic blades
Running on carbon fibre prosthetic blades which earn him the nickname "Blade Runner", Pistorius becomes a Paralympic gold medallist over 200m in Athens in 2004. Wins three gold medals at the Paralympics in Beijing in 2008.
London 2012 Olympics
In what was hailed as a significant turning point for disabled athletes, Pistorius successfully won the right to race against able-bodied athletes at the London 2012 Olympics.
Arrested
Pistorius arrested and charged with murder after firing four shots at his model and law graduate girlfriend Steenkamp through a locked bathroom door at his luxury Pretoria apartment.
Pistorius convicted
High court judge Masipa convicts Pistorius of culpable homicide in September 2014 after sensational seven-month trial. Also convicts him of firing a pistol under the table of a packed restaurant but cleared of the illegal possession of ammunition and firing a pistol out of the sun-roof of a car.
Jail
Pistorius starts his five-year jail sentence on Oct 21, 2014.
State lawyers file an appeal against both the culpable homicide verdict and five-year jail sentence in early November and Pistorius' lawyers oppose the motion.
Parole
Prosecutors win their bid in December after Masipa rules that she "cannot say the prospect of success at the Supreme Court is remote".
On August 19, 2015, South African Justice Minister Michael Masutha blocks Pistorius' release on parole due in two days, saying decision to free him was made without the right legal basis.
Pistorius released to house arrest on Octtober 19 to serve the rest of his sentence under house arrest at his uncle Arnold's home in a wealthy suburb of the capital Pretoria.
Guilty
Supreme Sourt of Appeal overturns Masipa's ruling and finds Pistorius was guilty of murder.
AGENCIES