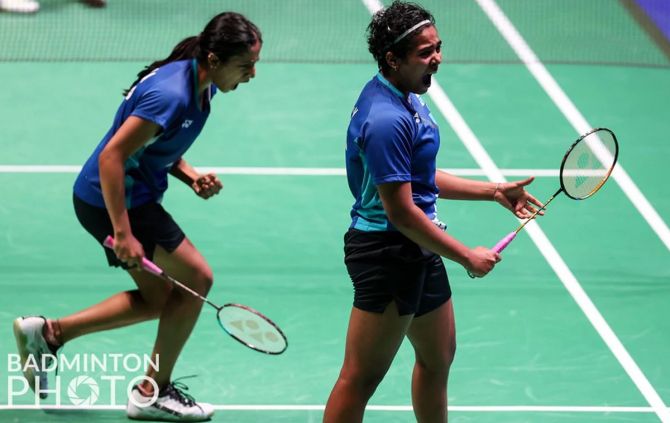 IMAGE: The Indian pair of Gayatri Gopichand and Treesa Jolly in action during their women’s doubles semi-final at the All-England Badminton Championships. Photograph: All England Badminton/Twitter

The women's doubles pair of Gayatri Gopichand and Treesa Jolly bowed out of the All-England Badminton Championships, losing in the semi-finals, at the Utilita Arena in Birmingham, on Saturday.

The Chinese pair will meet Japan's Nami Matsuyama and Chiharu Shida in the final.

World No. 11 Sen will take on No. 1 Viktor Axelsen. The Indian youngster goes into the contest with a 1-4 head-to-head record.

The last Indian to make the singles final at the All-England Championships was Saina Nehwal, in 2015. She ended up runner-up.

Only two Indians have won the tournament before, Prakash Padukone in 1980 and Pullela Gopichand in 2001.