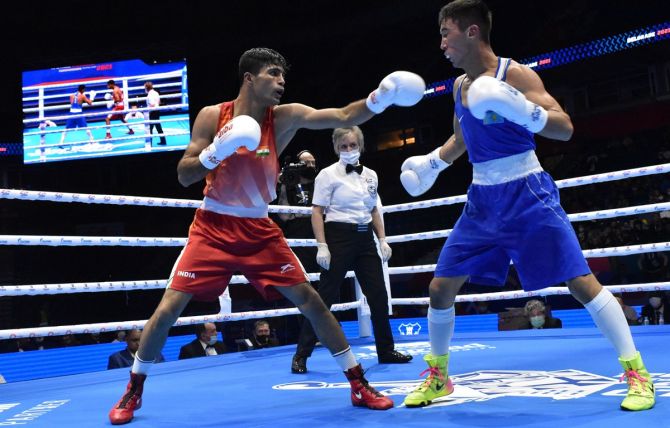 IMAGE: India’s Akash Kumar, in red, in action during the 54kg semi-final bout against Kazakhstan’s Makhmud Sabyrkhan at the World Boxing Championships, in Belgrade, on Thursday. Photograph: Boxing Federation of India

Debutant Akash Kumar (54kg) signed off with a bronze medal in the AIBA men's World Boxing Championships after losing to Kazakhstan teenager Makhmud Sabyrkhan in the semi-finals, in Belgrade, on Thursday.

The 21-year-old was beaten 0-5, ending India's campaign in the marquee competition, where Akash became only the seventh Indian male boxer to secure a medal. He also claimed a prize-money of US $25,000.

The Indian started superbly but Sabyrkhan got his measure in a matter of seconds, scoring primarily with fantastic right crosses to slow down Akash after the early burst.

The 19-year-old Kazakh, the country’s reigning National champion, was the less exuberant of the two but clinical in his execution, not letting slip any chances at scoring off counter-attacks.

Sabyrkhan clinched the opening round unanimously and maintained the lead in the second round as well even though Akash gave a better account of himself by troubling the Kazakh with good jabs.

However, Sabyrkhan was not to be fazed by Akash's sporadic shots.

Despite the defeat, the Haryana-lad, who hails from Bhiwani, can be proud of the fantastic performance in his maiden senior international competition.

He upstaged former Olympic silver-medallist Yoel Finol Rivas of Venezuela in the quarter-finals.

A product of the Army Sports Institute in Pune, the Services boxer lost his mother to a lung infection in September and competed in the National Championships unaware of the tragedy.

His father died more than a decade back after initiating him to boxing and his brother is in jail since 2017 in connection with a murder case.

India secured an unprecedented silver through Amit Panghal in the event's previous edition, while Manish Kaushik claimed a bronze.

The gold winners at the showpiece will walk away with a prize-money of US $100,000.

The total prize purse is a whopping US $2.6 million.