The cricket icon is a co-owner of the Chennai franchise, one of the new teams added to the sport league 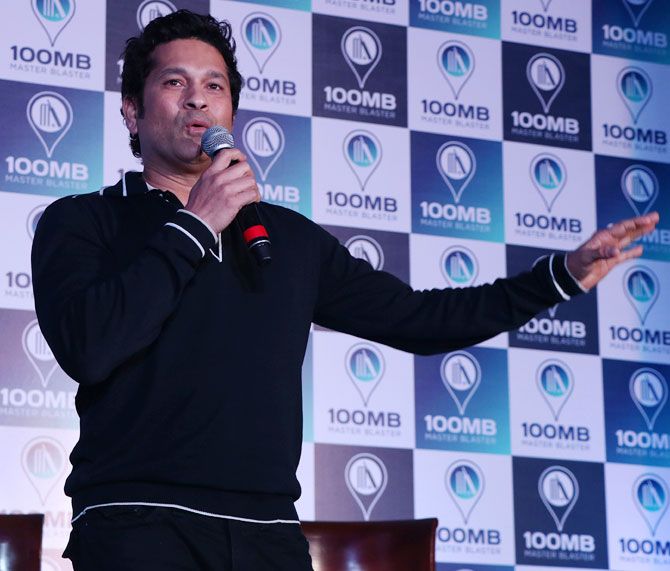 IMAGE: The team from Chennai is owned by a consortium that includes Sachin Tendulkar. Photograph: Hitesh Harisinghani/Rediff.com

Legendary cricketer Sachin Tendulkar has added heft to Pro Kabaddi by co-owning one of the four new teams.

Days after signing Vivo as its title sponsor in a Rs 300-crore deal, the annual kabaddi league promoted by Mashal Sports has added four teams to the existing eight.

The new ones include corporate institutions and independent promoters, some of whom are also the owners of teams in the Vivo Indian Premier League, the Indian Super League (ISL) and the I-League.

The new geographies for Vivo Pro Kabaddi -- Tamil Nadu, Haryana, Uttar Pradesh, and Gujarat -- have been primarily chosen for high affinity towards kabaddi with massive fan bases, significant on-ground presence of the sport, and potential commercial value to sponsors and advertisers.

The team from Chennai is owned by a consortium that includes Tendulkar. The other three teams -- Ahmedabad, Haryana and Lucknow -- are owned by single entities -- Adani Group, JSW, and GMR, respectively.

The consortium that has picked up the Chennai franchise is the same that owns the Kochi team in the ISL (football); GMR owns the Delhi Daredevils franchise in Vivo IPL; and JSW owns Bengaluru FC, which is part of the I-League (football).

Business sources said the ownership cost for the new promoters would be almost the same as for those who picked up teams when the league started. The total cost of owning and running a team in Pro Kabaddi is estimated at Rs 5-7 crore.

Uday Shankar, chairman and chief executive officer, Star India, said, “I am delighted to welcome some of India’s finest corporates to our Mission Kabaddi. We believe that with the support of existing and new partners we are well on our course to realising a socially transformative sports agenda. The interest shown by these corporates is evidence of the immense potential of kabaddi.”

“We laud Star India and Mashal Sports for uniquely transforming and renewing Kabaddi, and their relentless efforts to scale it even higher. The addition of four new teams to the ever-growing Vivo Pro Kabaddi League signifies a promising road ahead for the sport in India, as well as over the world.”