African athletes are expected to continue their dominance with runners from Kenya and Ethiopia likely to battle it out for top honours from among 2475 participants at the 9th Standard Chartered Mumbai Marathon on Sunday.

Athletes from the two African nations will renew their rivalry here once again, with Gena leading a talented bunch of Ethiopians. The Kenyan challenge will be spearheaded by Moiben, former world champion Kibet, William Kipsang and Bernard Kosgei.

Moldovan Iaroslav Musinschi, who has a personal best of 2:08.32 clocked in May 2010, is expected to be the dark horse.

The women's field, in which a clean medal sweep was made by the Ethiopians last year, will see strong representation from that country with Makda Harun and Fatuma Sado leading the charge. The Kenyan challenge will come in the form of Lydia Rutto, while Namibia's Hilalia Johannes will also be a name to look out for.

Among the current Kenyans who are in form are Moiben Laban, who clocked 2:10.18 in May in Ottawa, Nixon Machichim, who ran 2:09.37 in Linz in April, John Kyui, who clocked 2:09 in Zurich in April and Luke Kibet.

The Ethiopians can expect to be challenged by Turkey's fast improving Sultan Haydar, Namibia's Johannes Hilalia, who clocked 2:30.35 in Dublin and Russia's Tatyana Vilisova.

From the Indian perspective, the best positive aspect is that the Athletics Federation of India has buried its hatchet with the event organisers, which will allow the country's athletes to try and qualify for the London Olympics.

Besides, the financial gratification for the Indian athletes has been increased by $10,000 from last year, which now stands at $52,000. The top Indian male and female finishers will now stand to gain USD 7,500 each.

Defending Indian champions -- Binning Lyngkhoi and Jyoti Gawate -- will lead the country's challenge in the men's and women's field respectively.

Veteran long distance runner Ram Singh Yadav and KC Ramu are among the other male hopefuls, who are aiming to attain the magic time of sub 2:18 to seal a berth for London.

"We have been practising a lot. The marathoners were training at Ooty in high altitude conditions which have helped increase their endurance levels. I and even the athletes are sure that they will get a ticket for the Olympics," said Army coach K S Matthews.

Shastri Devi, Preeti L Rao and Lalita Babar, who has made a switch to the full marathon this year, are among the other Indian female marathon runners. 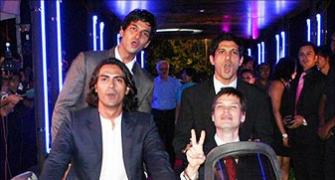 Luke Kenny: Life after Rock On