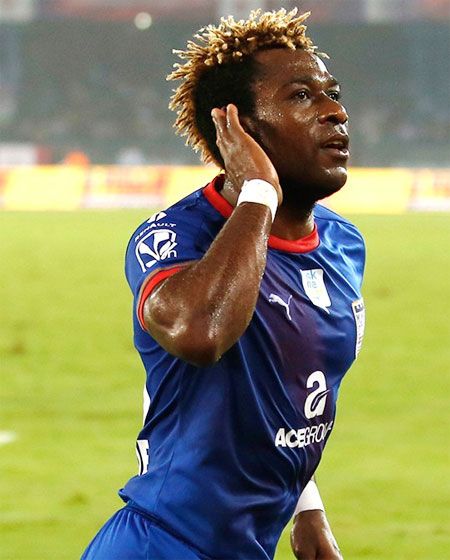 The fit-again Norde fired in a powerful right-footer from 22 yards to the top right corner of the net to give Mohun Bagan a 28th \minute lead.

Despite missing one match in I-League and the AFC Cup first leg fixture in Colombo due to a hamstring injury he sustained against DSK Shivajians on January 24, Norde was in his elements --  he also assisted Darryl Duffy in Mohun Bagan's second goal in the 56th minute.

Colombo FC's Ivory Coast signing Seka Jean Yapo, who landed with two of his other foreigner colleagues after much drama this morning, gave them something to rejoice when he reduced the margin in the 88th minute.

Playing in front of a sparse 3156 crowd, at the Rabindra Sarovar Stadium that made its AFC Cup debut, Bagan could have easily pumped in at least a couple of more goals with Norde in the centre of goalmouth action.

The Haitian impressed not only in his strikes and deft passing but he was brilliant in receiving during his 62-minute stay before coach Sanjoy Sen replaced him with Balwant Singh.

Singh's substitution made little difference as he wasted a penalty, shooting straight to Colombo goalkeeper Mohammad Nazeer Imran in the 78th minute after Afeel Mohammed Nawshad committed a handball inside the box.

The first goal was a brilliant combined effort, with Pronay Halder initiating the move from the midfield as Katsumi Yusa took possession from the right to cross it to Duffy.

The Scot held the ball for a few seconds and turned around to set it up from a surging Norde, who was unmarked as he made full use of the opportunity to give them the lead against the run of play.

In a must win situation, the visitors, who were bolstered by all of their foreigners -- Nasiru Opeyemi, Seka Jean Yapo and Afeez Olofin -- held the possession in the initial 15 minutes as Mohun Bagan took time to settle down.

In a 44th minute move, Duffy's brilliant diagonal ball was intercepted by Norde who set up Bikramjit Singh Senior in front of an open goal but his shot was wayward.

But they did not have to wait long for a second goal with Yusa initiating the move from near midfield and his diagonal ball was controlled by a surging Norde inside the box.

Norde sent in a low cross to Duffy who made it 2-0 with his deft touch that virtually sealed the fate of the Sri Lankan team.

The Colombo outfit pulled one back when Dilan De Silva Kaushalya fed in a quick tap to Yapo and the Ivorian got past four Mohun Bagan players inside the box to slot the ball into the right corner of the net.

The Colombo club’s three foreigners -- Opeyemi, Yapo Afeez Olofin -- made the starting line-up less than eight hours after they joined the team.

Earlier in a late night development, the visa hurdles for the trio were cleared by the Indian High Commission in Colombo as they landed around 11 am on Tuesday.

Image: Sony Norde had a perfect match for Mohun Bagan on his return from injury