Mohun Bagan notched up their second consecutive victory with a 4-0 thrashing of a 10-man South China of Hong Kong in an away match of the AFC Cup football tournament in Hong Kong on Wednesday. After their second consecutive win at the continental second tier club competition, Mohun Bagan remained on top with six points from two matches, two points clear of Yangon United of Myanmar, who played out a 1-1 draw with Maziya Sports and Recreation in Male, Maldives.

Mohun Bagan next play Yangon United of Myanmar on March 16 in Guwahati.

In the other AFC encounter on the day, Federation Cup champs, Bengaluru FC suffered a narrow 0-1 defeat to defending champions Johor Darul Ta'zim (JDT) in their Group H encounter at the Sree Kanteerava Stadium in Bengaluru.

A solitary strike from Safiq Rahim (55') was enough to see the Malaysian side secure all three points.

Despite Bengaluru's best efforts through the match, the away team held on for a slender 1-0 win which took them to the top of Group H with six points in two games.

Ashley Westwood's side, on the other hand, remain bottom having failed to register a single point in the opening two fixtures.

Image: Action from the AFC match between Mohun Bagan and South China in Hong Kong on Wednesday 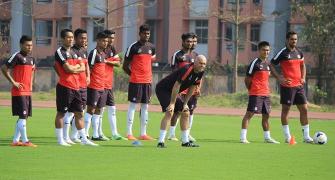