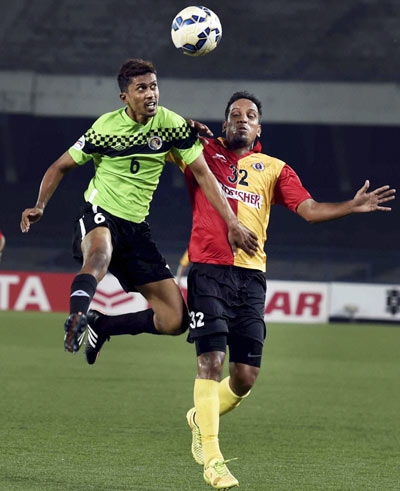 Despite fielding their reserve team, East Bengal dominated the proceedings to hammer Balestier Khalsa FC 3-0 for their first win this season in the the AFC Cup football tournament at the Vivekananda Yuva Bharati Krirangan in Kolkata, on Tuesday.

East Bengal struck through Baldeep Singh's, who scored in each half (22nd and 71st minute) and substitute Ranti Martins (75th) completed the rout to keep their slim hopes of qualifying for the knockout round alive.

The red-and-gold brigade also avenged their 1-2 defeat to the Singaporean outfit that slipped to bottom of the group F standings with three points, while East Bengal (four) jumped to third place.

In the 21st minute, Shylo Malsawmtluanga's freekick was headed out by Mohammad Rafique and hit a Balestier defender's hand, but the referee Kim Daeyong ruled out a foul and awarded a corner.

Malsawmtluanga took the resultant corner as Baldeep put the ball in with a powerful header to give East Bengal the lead.

East Bengal could have easily doubled the lead after the changeover, but Baldeep made a mess of a neat through pass from Baljit Singh, fluffing in front of an open net.

Baldeep completed his second goal after he put it across Nurullah into the top corner.

Eight minutes after he was brought in, Martins made his presence felt when he took the possession from Baldeep and fired the ball in.

Robin Singh fired home a long-range winner to give Bengaluru FC a 1-0 win over Warriors FC in the AFC Cup football tournament in Singapore, on Tuesday.

Bengaluru's first away victory in Asia came after they endured a frustrating 75 minutes where a combination of fine goalkeeping and lackadaisical finishing meant the overwhelming domination by the visitors would count for nothing.

Bengaluru FC are second in Group E with nine points from four games.

Westwood chose to start Sean Rooney on the bench, handing Beikhokhei Beingaichho a place on the right. But just as Bengaluru were getting more than a toe hold into the game, he was forced into a substitution after John Johnson struggled with what looked like a tight muscle.

With a packed league schedule ahead, Westwood chose not to risk Johnson, replacing him with Gurtej Singh who made his Asian debut for the club.

Sensing the hosts were content to sit back and defend, Bengaluru wasted little time in chasing the goal that took a while to come. Sunil Chhetri had the best chance of the first half when he was denied by Ong from a move he began. Making a quick steal on the left, Chhetri exchanged a quick one-two with Robin Singh that found him one-on-one with Ong who charged the striker to thwart his attempt to finish.

Only minutes later, Lyngdoh's tap in from close was kept away by Ong as Bengaluru went to the drawing board with everything but a goal.

Bengaluru carried their frustrating run into the second half before Robin decided to put the matter to bed. A loose goal kick by Marin Vidosevic was picked up by Lyngdoh who found Robin for a pass. Twenty-five yards away and two touches later, Robin picked Ong's left before unleashing a strike that got the Blues the points.