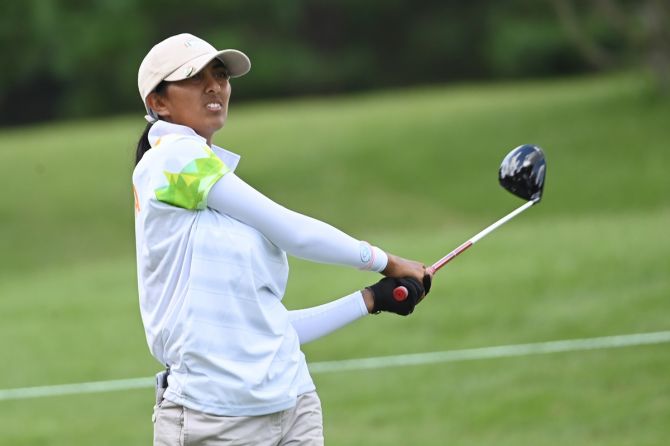 IMAGE: India's Aditi Ashok was in contention for an Olympics medal in the women's Individual Golf final for a major part of the day but two bogeys pulled her back and she had to settle for fourth place. Photograph: Toby Melville/Reuters

From classes to masses in a matter of few hours. Golf managed to excite India like never before thanks to one woman's history-making star turn at the Olympics.

The fourth and final round of the Olympic women's golf event in Tokyo may easily end up being the most watched event in the history of the sport in India.

The nation of 1.3 billion people was glued to television sets as early as 5am, following the fortunes of Aditi Ashok, who after three days, was lying second and in line for an unprecedented medal in golf at the Olympics.

The 23-year-old, who played in Rio 2016 as well, had the global fraternity cheering her then after two days of great golf. But she finished T-41st and was then forgotten.

On Saturday, she missed a medal by a whisker and signed off fourth.

However, her performance took golf to never-before-seen heights in India in a matter of hours.

Birdie, bogey, eagle trended on social media as people scrambled to make sense of drives and putts in the sport largely considered a sport of the rich, generating the kind of buzz that is mostly reserved for cricket matches.

Her gutsy play not only earned her a lot of eyeballs, but also fulsome praise from the President of India, Ram Nath Kovind, and Prime Minister Narendra Modi among others.

"Well played, Aditi Ashok! One more daughter of India makes her mark! You have taken Indian golfing to new heights by today's historic performance. You have played with immense calm and poise. Congratulations for the impressive display of grit and skills," the President tweeted.

Modi summed it up aptly by stating, "A medal was narrowly missed but you've gone farther than any Indian and blazed a trail." IMAGE: Overnight sole second, Aditi Ashok finished fourth with a three-under 68 in the final round that left her 15-under 269 overall. World No. 1 Nelly Korda of the US took gold with a four-round total of 17-under 267. Photograph: Toby Melville/Reuters

Till some days ago and even in the final round, some commentators referred to shots as 'points' yet the interest in golf was undeniable as Aditi consistently stayed in Top-3 for the first three rounds.

Placed second after three days of competition and with the news filtering in of a possible storm, India was salivating over the prospect of a medal from golf, a sport considered elitist.

On Saturday, even more than during the third round on Friday, all eyes and ears seemed to be on Aditi as she came close to a medal.

One of the social media platforms, 'Twitter Spaces' had more than 140 people at one time discussing Indian golf even though everyone watched it on TV.

The platform was full of activity for as long as four to five hours.

On Twitter, Olympians like Abhinav Bindra were following and praising Aditi. Mahesh Bhupathi, who once came fourth alongside Leander Paes in Olympics tennis, was expressing his appreciation and that he was now a "fan for life" of the Bengalurean.

Golf has never really got the attention it has deserved, often because many people don't understand it.

Saturday onwards, golf may no longer be a poor rich cousin of many of the other sports.