Abhinav Bindra shrugged off a bout of flu to clinch the gold medal in 10-meter air rifle event at the Asian Shooting Championships, which got underway in Doho On Friday.

Bindra, who had never won a gold at these championships, started the qualification round with a perfect series of 100.

He could have ended with the lead but for an 8 in the fourth series. However, he recovered well to end on a high. 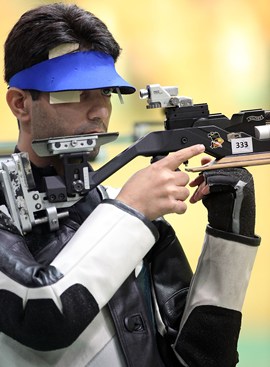 At times he was struggling with his health and coughing, and even had to step back from the firing point to regroup on a couple of occasions.

Rajiv Gandhi Khel Ratna awardee Gagan Narang recovered from a disastrous start to also make the final with a qualifying score of 595.

He started with a 97 in his first series and a 99 in his second. He then reeled of three perfect series of 100 each before shooting 99 in the last.

The third Indian in the fray, Satyendra Singh had an off day, shooting a below par score of 582/600. The combined total of the three shooters gave India the silver medal in the team event, behind the Chinese team that created a new world and Asian record with a total of 1793/1800.

Bindra started the 10 shot final with 10.7 to put the pressure on the Chinese shooters. His second scoring shot was a 10.8, which was matched by both Narang and Qinan.

Bindra moved into the lead after the third shot, on which he scored 10.6, while Qinan got 10. But Qinan stormed back with a series of precise shots that saw him regain the lead.

However, two consecutive shots of 9.8 in the eighth and ninth visits saw Bindra close the gap. He then responded with 10.3 and 10.5 to go forge ahead and hold a lead of just 0.1.

With the gold medal at stake, he then scored 10.5 to put the pressure on Zhu, who was the last shooter to fire.

Zhu could only score a 10.3, which sparked off celebrations in the Indian camp.

Bindra's final tally was 701.1 while Qinan finished with 700.8. Tao, who started the final badly, came back well to clinch the bronze with a combined total of 699.7.

Incidentally, Bindra top-scored in the final with 104.1, while Narang was second with 103.2.

There was disappointment for India in the men's 50-metre pistol event, as Om Prakash placed way down at 14th, and Omkar Singh and Amanpreet Singh 20th and 21st.

Ruslan Ismailov of Kyrgistan and Bayara Nyantai bagged the two Olympic quota places on offer after finishing sixth and seventh respectively. The top four shooters had already won quota places for their countries, making them ineligible for qualification.

Speaking after the competition Bindra said, "It was a good result. It doesn't help me but it does not hurt me either."

His coach Heinz Reinkemeier was more forthcoming on the win.

"I am happy with the win. We are building up towards London 2012 and this is exactly the result we wished for. We are satisfied with the outcome. We do not focus just on the result; we look at other factors like performance. I enjoyed the technical skills and the timing."

Commenting on Bindra's health, he said, "If a shooter has a problem then it is good. One has to learn to shoot under pressure. A cold takes around seven days to complete a cycle and Abhinav was just about over the hill when the competition started this morning. Unlike sports like tennis and football in shooting you can manage despite not being 100 percent fit."

The Asian Shooting Championships is the last opportunity for shooter to qualify for the London Games. The final selection for Indian marksmen, though, wrests with the National Rifle Association of India (NRAI), which will take into consideration the players' scores in competitions throughout 2011. 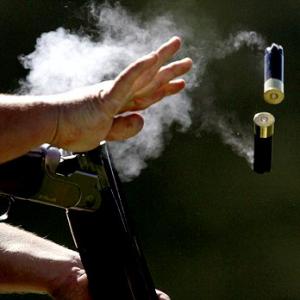