'The greatest emotion I felt at that moment was the feeling of relief because, throughout my journey, I have been very obsessive with my goal.' 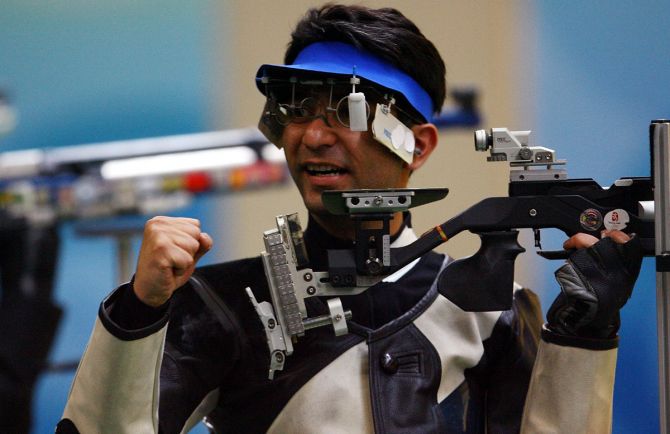 India's first individual Olympic gold medallist Abhinav Bindra said that even before he had shot his first competition shot in Beijing, he considered himself as a winner in his own eyes.

The date of 11 August, 2008 is definitely one of the most defining moments in the history of Indian sports, but what most sports fans don’t know are the few things that went wrong for Bindra that day.

When quizzed about those moments of panic, the former shooter, who was the first guest in the inaugural edition of the web series named The Finish Line, said: "Just 5 minutes before the big final, I realized that the sight of my gun had been altered just a little bit. There was complete panic that was running through my head, but funnily enough, going into Beijing I had also trained for it."

"I was frozen for a moment though and had no clue what to do but giving up was not an option. I decided that I have to fight, hence I got up and tried to get my sights working in order. From there on I shot the best 10 shot of my life that eventually got me the medal."

The eight-part web series conceptualized and produced by Baseline Ventures documents eight defining moments from Indian sports by recreating the moment by the very athlete, who made history.

It probably just happens once in a lifetime that everything works like clockwork and the rhythm flows perfectly. For Bindra too, it was one of the most surreal feelings of his life.

"Well at that time it was very important for me to remain in the moment, I was not thinking ahead at all and just taking it one shot at a time. There was definitely a storm brewing up but since I had accepted the storm, all the things that were happening surrounding it did not really matter to me. I was just trying to be immersed in my technique and I was actually immersed in it. That is the difference between really performing well and not performing well at the highest level," said the Olympic champion.

After hitting a shot of 10.8 which was the best shot of his round, Bindra was still confused if he had won the gold. He looked around to enquire if he actually did.

When he was asked about that moment, he said "The greatest emotion I felt at that moment was the feeling of relief because, throughout my journey, I have been very obsessive with my goal. All my eggs were in one basket, certainly not the way I promote to young athletes. It was a huge amount of relief that, what I had set out to do in my life, I was able to achieve that. It was the greatest emotion that I had felt. I was very happy as this moment was the biggest thrill of my life, that thrill lasted for 2 seconds and that’s it.”