A heart-wrenching tale of forgotten athletes 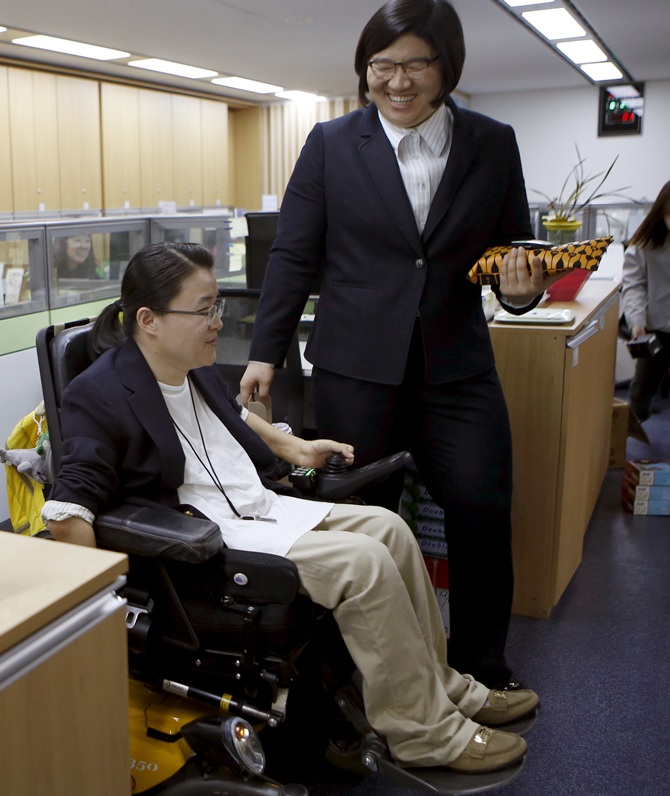 IMAGE: Kim So-young, left, a former gymnast who was paralysed from the neck down at 16 after falling off the parallel bars while training, talks to former Olympic gold medalist Jang Mi-ran at her office in Seoul. Photograph: Kim Hong-Ji/Reuters

Weightlifting champion Kim Byeong-chan died alone, paralysed and penniless after a motorcycle accident cut short his career, and for some former athletes his demise is a consequence of South Korea's ruthless pursuit of sporting excellence.

The limited social safety net for athletes who get seriously injured, or who fail to make the grade, is a concern for many sportsmen and women in South Korea, a country which arrived on the global stage with the hosting of the 1988 Seoul Olympics.

Park Chung-hee's regime of the 1960s saw sport as an avenue to raise Korea's global profile and gain legitimacy at home, and poured huge amounts of money into creating an elite athlete programme as well as bidding to host international competitions.

While the programme boosted Korea as a sporting power and produced world-class athletes, it also has a darker side.

Athletes at schools and universities rarely excel academically and are encouraged to focus all their efforts on joining the sporting elite.

Those who fail to win international titles or make national teams have little to fall back on when their sporting careers end, and they can expect little help from the government, according to support groups. 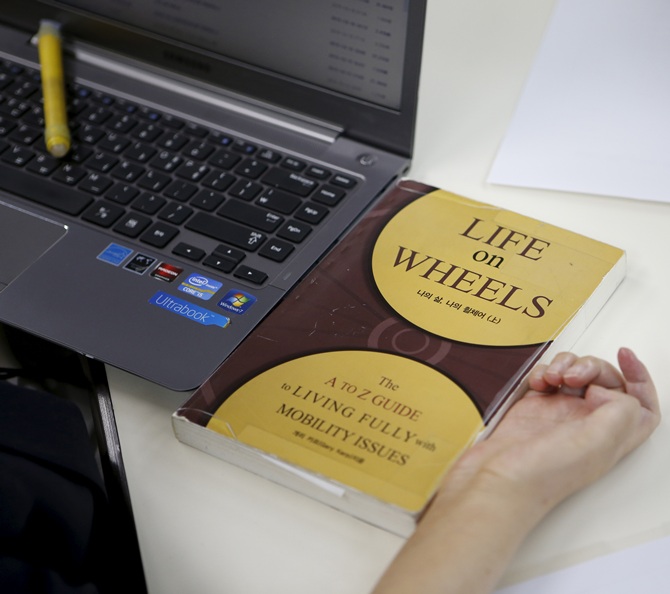 IMAGE: The limited social safety net for athletes who get seriously injured, or who fail to make the grade, is a concern for many sportsmen and women in South Korea. Photograph: Kim Hong-Ji/Reuters

South Korean lawmaker Elisa Lee recognised the need to provide better support for athletes and introduced a bill that would provide pensions to national team members who sustain serious injuries, designating them 'people of national merit'.

The proposal was passed into law in January 2014 but has taken almost two years to finalise guidelines and standards.

The Sports Ministry only began accepting applications on Oct. 1. A ministry official said it expected four applications this month.

"This law is symbolic in that it shows the country is protecting its national team athletes," Lee told Reuters. "But if the country really wants to help its sports people, it needs to reform the sports welfare system, this is the bottom line.”

Lee, a former table tennis world champion, said it was unlikely the law would be extended to include non-national team members.

"I wish the country would come up with ways to help sports people when they retire as well as athletes who have lost their way in life," she said.

"It's not a great amount of money we're asking for." 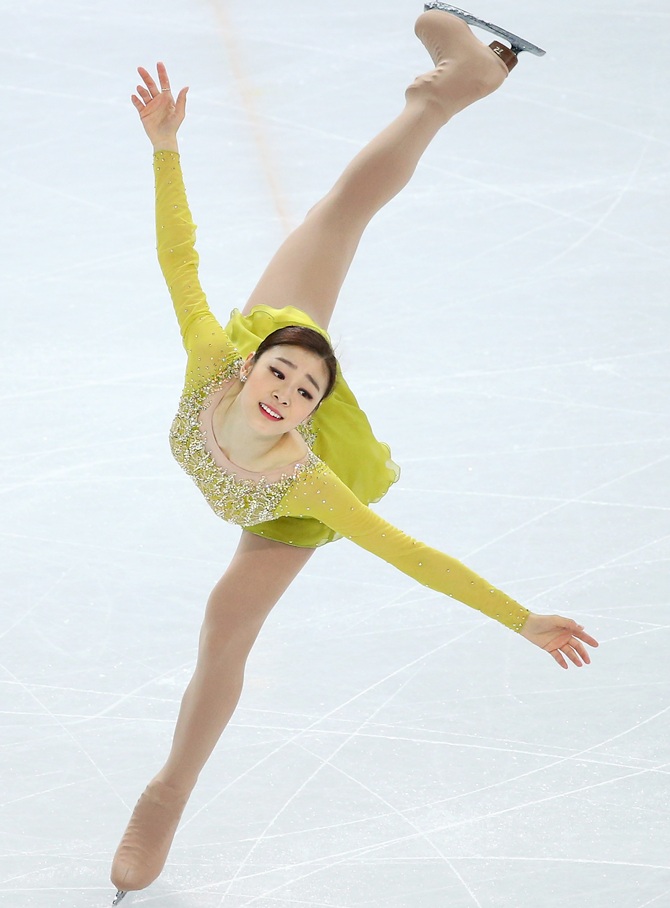 Former national volleyball player Chang Yoon-chang said athletes have a hard time getting jobs and adjusting to society when their careers end because they are "made into machines" through years of training and competition.

Chang, president of the Korean Association of National Team Members, which aims to protect the rights of the local sports community, said very few athletes reach the pinnacle of their sport and most are unprepared for what comes next.

"Ninety-nine per cent of athletes disappear before they bloom," Chang said. "Only one Kim Yu-na comes out of 1,000 figure skaters. Same with soccer, one Park Ji-sung out of thousands of soccer players.

“It takes a tremendous amount of hard work to win a medal, but the government has a tendency to look down on these elite sports people. The treatment athletes receive after their retirement is unbelievably bad."

Kim Yang-rea, who led research into the status of 3,000 retired athletes for the Korea Institute of Sport Science, said close to a third end up unemployed.

The sports industry is too small to employ all of Korea's former athletes, Kim said, and they often struggle to adapt to normal life not governed by training and competition.

“There needs to be a system that can support athletes by managing their careers and improving their general job skills," Kim said. "Since they are not capable of working right after retirement, (the government) should give them money or at least help them attain the skills needed for other careers.”

'It could have been me'

Kim the weightlifter was one of those athletes who poured his heart and soul into sport.

He won a gold medal at the 1990 Asian Games, as well as silver and bronze medals at the World Championships a year later, and was viewed as a potential Olympian until a motorcycle accident in 1996 left him paralysed from the waist down.

Unable to find a job and struggling to survive on a pension of some $500 a month awarded to medallists from international competitions, Kim's body was discovered in his flat by a neighbour in June.

The cause of death was not disclosed but media reports said he had suffered various illnesses.

Kim So-young, a former gymnast who was paralysed from the neck down after an accident on the asymmetric bars, said the weightlifter's death should be a wake-up call.

"It could've been any athlete's story, including mine," said Kim, who now works for the Korea Spinal Cord Injury Association.

"There is nothing a disabled athlete can do. For us, sport was everything."

‘It's a common saying that athletes are dumb. This is wrong’

One former athlete, paralysed from the waist down two years ago while training, told Reuters it was impossible to combine athletics at the highest level with traditional schooling.

"It's a common saying (in South Korea) that 'athletes are dumb.' This is wrong," said the athlete, who declined to provide his name due to an ongoing lawsuit.

"Athletes are very clever but in a way we are ignorant because we don’t learn the knowledge taught at school."

Almost every waking minute was dedicated to sport at school, he said, with training starting at six in the morning and continuing after school until 10 p.m.

"If I went to school, it was really hard to stay awake. I didn’t really participate in class, even in the really basic ones," he added.

"You can ask all the athletes out there, and I guarantee they all sleep in class. Teachers used to say that even if we sleep throughout the entire class, if we attend we’re doing a good job."

Former gymnast Kim knew the late weightlifter when he was competing and remembers him as outgoing and magnanimous, always surrounded with lots of friends.

Cho Hong-joong, one of the chief inspectors who recovered the body, said Kim had no family when he died. His funeral was organised by a local sports committee and held at Kangwon National University Hospital.

© Copyright 2020 Reuters Limited. All rights reserved. Republication or redistribution of Reuters content, including by framing or similar means, is expressly prohibited without the prior written consent of Reuters. Reuters shall not be liable for any errors or delays in the content, or for any actions taken in reliance thereon.
Related News: Kim So-young, South Korea, Elisa Lee, Chang Yoon-chang, IMAGE
SHARE THIS STORYCOMMENT
Print this article 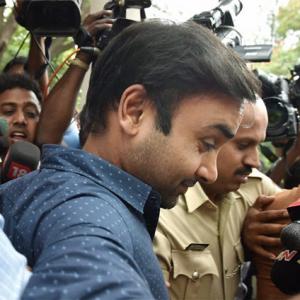 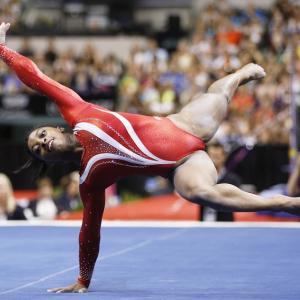 4 reasons why US women gymnasts are world beaters...