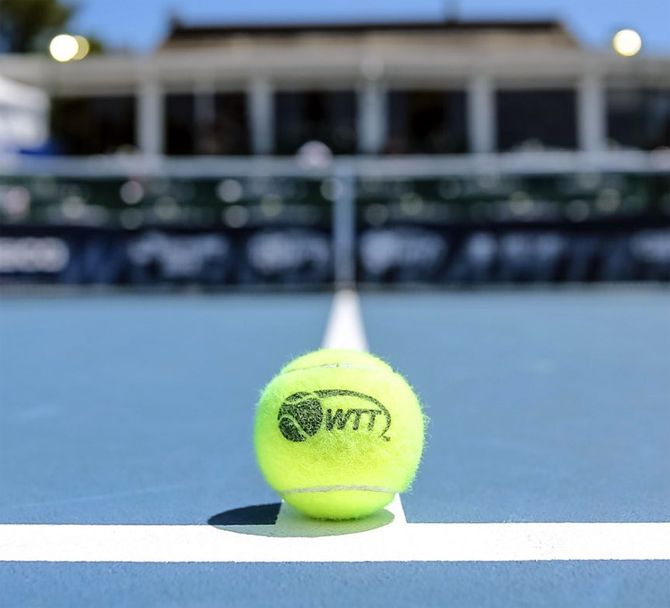 IMAGE: WTT said it would adhere to all health and safety protocols required by authorities to ensure the well-being of its players, coaches and essential staff amid the COVID-19 pandemic. Photograph: World TeamTennis/Instagram

World TeamTennis, an innovative mixed-gender professional tennis league, will start from July 5 at the Greenbrier, West Virginia, and up to 500 fans will be allowed to attend matches during its three-week season, tournament organisers said on Tuesday.

WTT said it would adhere to all health and safety protocols required by authorities to ensure the well-being of its players, coaches and essential staff amid the COVID-19 pandemic.

Grand Slam champions Sofia Kenin and Sloane Stephens are set to take part in the event, which will consist of a 63-match regular season followed by the playoffs.

WTT plans to stage at least three matches per day at the Greenbrier's 2,500-seat outdoor stadium, while an indoor court will be installed for back-up.

"The overwhelming feedback from our players is that they want to play WTT and are comfortable in doing so in a safe environment, which is our number one priority," WTT CEO Carlos Silva said.

The WTT also said it is increasing prize money to a record $5 million, with an added $1 million awarded in WTT Playoffs compensation.

All matches will be televised or streamed live on CBS, CBS Sports Network, Tennis Channel and ESPN+, tournament organisers said.

Tennis's top professional tours, the men's ATP and women's WTA, have been shut down since March 8 due to the novel coronavirus outbreak.

Tournaments in the United States and Germany have since taken place with strict social distancing measures and no fans in attendance.

New Zealand will stage a team-based tennis tournament for local-based men's players from June 3 while world number one Novak Djokovic has organised a tournament across the Balkans from June 13-July 5.