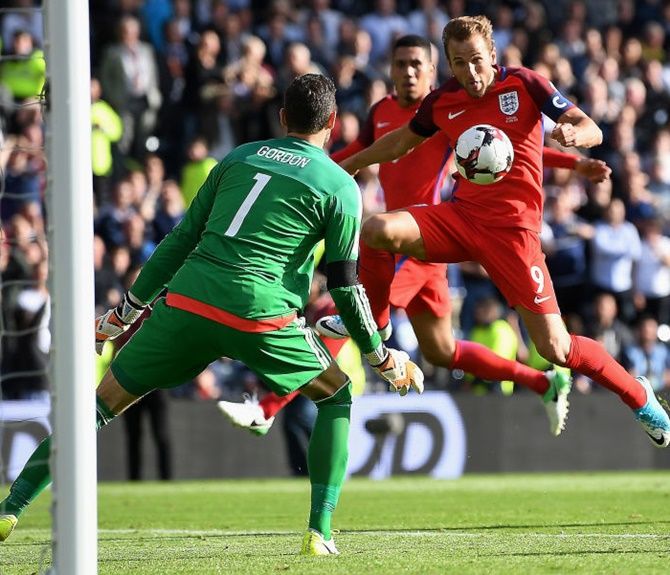 Harry Kane's injury-time goal gave England a 2-2 draw after a crazy finish to their World Cup qualifier against Scotland on Saturday with Leigh Griffiths having struck twice for the home side in the final three minutes.

Scotland were moments away from a famous victory after the Celtic striker scored with a pair of superbly taken free kicks in the 87th and 90th minutes. Substitute Alex Oxlade-Chamberlain had put England in front in the 70th.

With Hampden Park in raptures after Griffiths's double strike, with free-kicks from 25 yards, Kane saved England from a humiliating loss to their old rivals with his late goal from close range.

Raheem Sterling launched a diagonal ball from deep on the left and Kane lost his marker to side-foot volley past Scotland keeper Craig Gordon.

England, who were not impressive overall, remain top of Group F on 14 points while Scotland are in fourth spot on eight points.

"Two special free kicks and all of a sudden we're in stoppage time 2-1 down but it was unbelievable character to get that second which still leaves us top and in a great position. Qualifying is all that matters," Kane told Sky Sports.

"You have to expect the unexpected and we were 2-1 down from nowhere but we found another gear. It is a good point away from home. Scotland is no easy place to come," added the 23-year-old striker who captained his country for the first time.

It was agony though for Griffiths who, having not scored for his country before, was seconds away from entering Scottish football folklore. Scotland have not beaten England since 1999.

"It feels like a defeat to be honest. I knew we were going to be under the cosh for a lot of the game because England are a great team.

"To score two goals that late in the game we just have to see the game out but it was a poor pass when it was three on one in the attack and they put the ball in the box for a great finish from Harry Kane. It's not three points but it could be a massive point in the end," he said.

Scotland had started the game aggressively, roared on by a capacity 52,000 crowd but England gradually took control and ended the first half looking increasingly dangerous.

Jake Livermore had a deflected shot come out off the post in the 51st minute before Oxlade-Chamberlain broke the deadlock with a good strike, after cutting in from the left.

Forward Sandro Wagner scored a hat-trick, his first goals for Germany, to lead the world champions to a predictably comfortable 7-0 stroll against minnows San Marino on Saturday.

Amin Younes and Julian Brandt also scored their first international goals while Julian Draxler and Shkodran Mustafi shared the others as Germany maintained their 100 percent record after six games in European Group C.

The visitors, already beaten 8-0 at home by the Germans earlier in the group, remained without a point.

Northern Ireland stayed five points behind Germany in second place after an stoppage time goal by Stuart Dallas gave them a 1-0 win in Azerbaijan.

Czech Republic, on nine points, are a further four behind in third after drawing 1-1 in Norway. Azerbaijan have seven points and Norway four.

Germany fielded players from 11 different clubs in their starting line-up, the first time that has happened in 57 years, as coach Joachim Loew gave starts to some of his less experienced players.

The game failed to attract a full house in Nuremberg and was embarrassingly one-sided with Germany enjoying 77 percent of possession and managing 18 efforts on goal while their opponents failed to muster a single shot.

Germany took 11 minutes to break the deadlock when Draxler fired home after a group of San Marino defenders got in each other's way and failed to clear the ball.

Wagner, winning his second cap after being called up last month for the first time at the age of 29, got in front of his marker to head in Joshua Kimmich's cross for the second five minutes later.

Wagner struck again in the 29th minute before Younes got in on the act before halftime after more poor defending from the visitors.

Mustafi added the fifth two minutes after the re-start, scrambling the ball home despite a poor first touch after San Marino again failed to clear a corner.

Substitute Brandt scored the best goal of the night when he headed in a delightful dinked ball from Kimmich and Wagner completed his hat-trick in the 84th minute with an easy header from another Kimmich assist.

© Copyright 2022 Reuters Limited. All rights reserved. Republication or redistribution of Reuters content, including by framing or similar means, is expressly prohibited without the prior written consent of Reuters. Reuters shall not be liable for any errors or delays in the content, or for any actions taken in reliance thereon.
Related News: Harry Kane, Sandro Wagner, Amin Younes, Scotland, Joshua Kimmich
COMMENT
Print this article 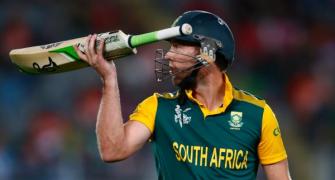 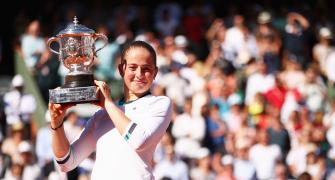 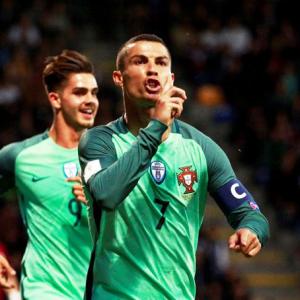 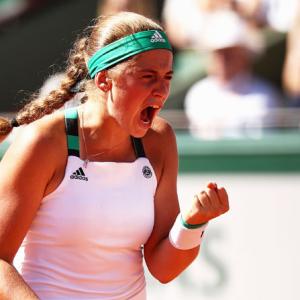