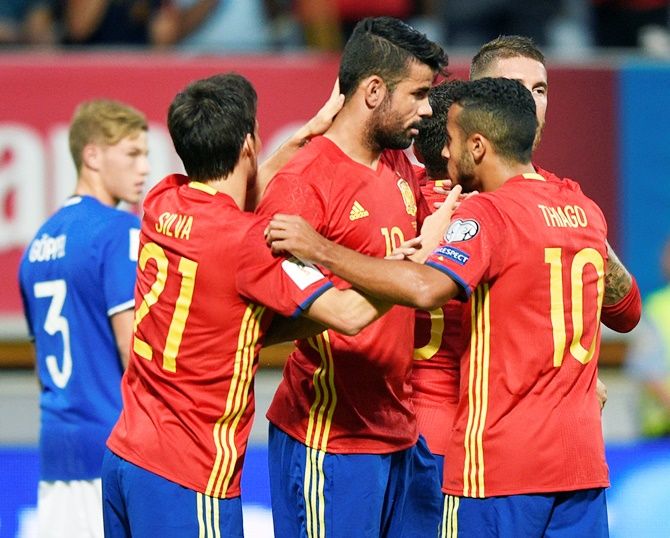 Spain started their World Cup qualifying campaign with a crushing 8-0 win over Liechtenstein, laying down a marker in Group G with a ruthless second-half display on Monday.

Diego Costa scored his first goal for Spain in almost two years to put Julen Lopetegui's side ahead in the 10th minute in their first competitive game under their new coach and Sergi Roberto doubled the lead in the 55th.

Costa got his second while David Silva and substitute Alvaro Morata also got braces and Vitolo opened his international account as the former World champions ran riot.

"Sometimes an opponent's name can fool you but we played a great game," said Lopetegui. "We reaped in the second half what we had sowed in the first."

Costa was the focus of the pre-match build-up having netted once in his previous 11 appearances since switching nationalities from Brazil in 2014 and needed only 10 minutes to open the scoring, rising high to head in Koke's free kick.

The entrance of substitute Nolito for Thiago Alcantara at the start of the second half livened up the home side and it was the Manchester City forward who laid the ball on for Roberto to grab his first international goal.

The floodgates had opened for Spain, the 2010 world champions who lost in the last 16 of this year's European Championship.

Silva was soon in on the act, adding to his double in the friendly against Belgium last week by turning in Vitolo's cross from close range.

Barely a minute later, Silva repaid the favour by teeing up the Sevilla forward to mark another impressive display for his country with a goal.

Spain only grew hungrier and Costa wanted another bite. He effortlessly turned two defenders in the area before firing at goalkeeper Peter Jehle's right foot, calmly nodding in the rebound for the fifth goal.

"Players control their destiny and we just try to help them, but Diego is a great player and he proved it today," added Lopetegui.

Costa came off to a standing ovation but his replacement Morata threatened to upstage him with two strikes in under a minute, slamming in at the near post before striking the ball past the hapless Jehle from the edge of the area.

Silva had a goal harshly ruled out as stoppage time approached but the City playmaker grabbed his second a minute later with a crisp shot. 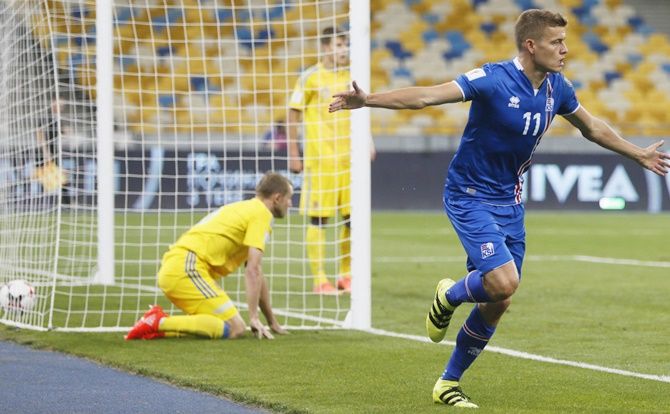 Iceland survived a missed penalty as they began their bid to qualify for a first-ever World Cup by holding Ukraine to a 1-1 draw away from home.

The visitors, who captured the imagination of millions of spectators by reaching the Euro 2016 quarter-finals, began where they had left off in France by taking a fifth minute lead through Alfred Finnbogason.

Iceland should have gone further ahead when Jon Dadi Bodvarsson's shot a close-range effort straight at goalkeeper Andriy Pyatov, then sent the rebound flying over an empty goal in the European Group I match.

They took control after halftime and Yevhen Konoplyanka was close with a long-range effort which Hannes Halldorsson managed to save.

The home side had an even better chance five minutes from time when they were awarded a penalty, however Konoplyanka's effort shaved the outside of Halldorsson's right post. Ten-man Italy earned a hard-fought 3-1 win away to Israel in their opening Group G World Cup qualifier after Giorgio Chiellini was sent off early in the second half.

The Italians took a two-goal lead with just over half an hour gone when Graziano Pelle slotted home in the 14th minute and Antonio Candreva converted a penalty in the 31st.

Israel got themselves back into the match in the 35th when forward Tal Ben Chaim lofted a ball over goalkeeper Gianluigi Buffon, who was caught off his line, and the momentum shifted.

They received a further boost in the 55th when defender Chiellini was sent off for the first time in an international after a second booking and the hosts pushed for an equaliser.

But Israel squandered a handful of chances and were dealt a final blow in the 83rd minute when Italy substitute Ciro Immobile powered past the defence and blasted home a low shot from the right of the area to secure all three points.

Italy coach Giampiero Ventura was delighted with the win from his first qualifying fixture in charge following a 3-1 defeat by France in a friendly last week.

"This was not an easy international fixture... I am happy with the result, even though the game did get a bit complicated after the Israeli goal but we managed to get through it."

A first half that began tentatively erupted when Pelle scored from close range after a defensive lapse on the left allowed Luca Antonelli to cross for the unmarked forward.

Italy looked to be cruising as the Israelis, rank outsiders even at home in front of a 29,300 crowd at Haifa's Sammy Ofer Stadium, were dominated by their more accomplished opponents.

Israel's fate appeared to be sealed but five minutes later striker Ben Chaim received a headed ball from Tomer Hemed 20 metres out on the right and, spotting Buffon off his line, chipped the ball elegantly into the back of the net.

Israel coach Elisha Levy was encouraged by the performance despite the defeat in his first competitive match in charge.

"We competed well and pressed hard, there was good momentum and we could have changed things, but I am disappointed by the result because we battled from the start but we were facing one of the best teams in the world..." he told reporters. Wales talisman Gareth Bale set up the first goal and scored twice, including a late penalty, as the Euro 2016 semi-finalists won 4-0 in their opening Group D World Cup qualifier.

The Welsh, who controlled the match in Cardiff, made the breakthrough seven minutes before halftime when Bale swung over a left-footed cross from the right and Sam Vokes headed home.

Joe Allen made it 2-0 in the 44th after a poor clearance from a corner fell to the midfielder on the edge of the box and he fired past three defenders for his first international goal.

Five minutes into the second half, Bale was quick to latch onto a poor back pass by Ion Jardan and raced into the box to neatly chip past goalkeeper Ilie Cebanu before scoring his 24th Wales goal from the spot with the last kick of the match.

"We know these games are very difficult," said Bale. "We've played teams like this before who are very difficult to break down. We're learning to cope with this kind of play against us a little better, we're growing as a team.

"It was an important win for us to get off to a good start. We enjoyed the past, that's history now. It's time to make some more," he added referring to their run at the Euros in France.

The win put Wales top of the group on goal difference from Austria, who won 2-1 against hosts Georgia in the early kickoff. Ireland drew 2-2 away to Serbia in the other match in the group.

A spirited Ireland held Serbia to a 2-2 draw in a pulsating World Cup Group D qualifier after taking an early lead and coming from behind on a slick surface.

Substitute Daryl Murphy salvaged a point for the Irish with an 80th-minute header after Serbia wingers Filip Kostic and Dusan Tadic had cancelled out Jeff Hendrick's early opener.

"We made a fantastic start but Serbia had a lot of possession in the second half and we couldn't get the ball off them," Ireland manager Martin O'Neill told a news conference.

"We came roaring back after they had turned the tide and I thought we deserved that draw."

Hendrick stunned the home fans in the third minute when he beat keeper Predrag Rajkovic with a shot from the edge of the penalty area that was deflected in off Serbia captain Branislav Ivanovic.

With competitive debutant Andrija Pavlovic replacing subdued striker Aleksandar Mitrovic on the hour, Serbia found another gear and struck twice in quick succession to turn the match on its head.

Kostic levelled when he swept home a rebound from a goalmouth scramble in the 62nd minute before he won a penalty after being hauled down by an Irish defender.

Tadic drove the spot-kick down the middle into the roof of the net in the 69th minute and Pavlovic could have netted a third, blasting his shot against the bar after Ireland keeper Darren Randolph spilled a tame Tadic effort.

Ireland had a goal disallowed for offside but got their reward when the bearded Murphy rose above his markers to score his first international goal.

The battling Irish enjoyed a slice of luck in the closing stages when they cleared the ball off the line as Serbia threw men forward in search of a winner.

"Obviously, the scars from previous qualifying campaigns are still visible and it will take a bit of time to get things right," he said.

"We had a poor first half but improved after the interval and I am confident this revamped 3-4-3 formation will get the desired results in the upcoming games."

© Copyright 2021 Reuters Limited. All rights reserved. Republication or redistribution of Reuters content, including by framing or similar means, is expressly prohibited without the prior written consent of Reuters. Reuters shall not be liable for any errors or delays in the content, or for any actions taken in reliance thereon.
Related News: Gareth Bale, Diego Costa, Wales, Serbia, David Silva
SHARE THIS STORYCOMMENT
Print this article 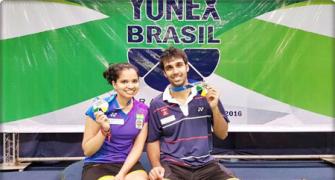 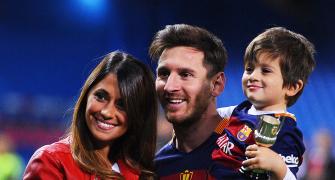 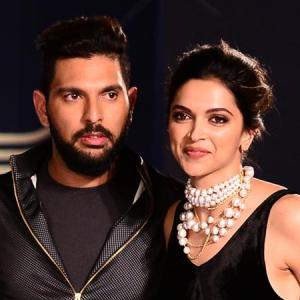