Barcelona stayed hard on the heels of La Liga leaders Real Madrid when Lionel Messi's brilliance lifted a side containing several youngsters from the club's B team to a 2-1 win at home to Real Sociedad on Saturday.

Real had earlier deployed close to their strongest team in a 1-0 victory at city rivals Getafe, defender Sergio Ramos nodding in the only goal on a bitterly cold and blustery night at the Coliseum stadium that lifted them to 55 points from 21 matches. 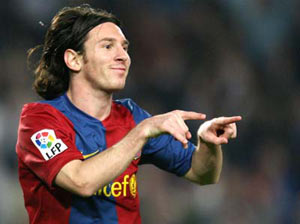 In the late kickoff at an equally chilly Nou Camp, more than 50,000 fans turned out to witness Barca's 10th victory in 11 home league games this season that kept them within seven points of their arch rivals.

B-team players Jonathan Dos Santos, Cristian Tello and Isaac Cuenca were included in the starting 11, with Cesc Fabregas taking on the playmaker role in central midfield.

Pacy 20-year-old Tello opened the scoring in the ninth minute when he dashed in from the left wing on to a Messi through ball and finished clinically past goalkeeper Claudio Bravo, his debut goal for the first team.

World Player of the Year Messi, who had earlier been denied by several excellent saves from the Sociedad keeper, made it 2-0 in the 72nd minute when he hooked in a Daniel Alves cross before Carlos Vela pulled one back for the visitors two minutes later.

Messi's strike put him on 23 league goals for the season, one behind Real forward and top scorer Cristiano Ronaldo, and Sociedad coach Philippe Montanier said the Argentine had been the difference between the two sides.

"Messi is a magician and anything can happen when he is on the pitch," Montanier, whose team are 13th on 24 points, said.

"I know that Barca have been playing a lot of matches and they had to make quite a few changes but they played the way they always do," the Frenchman added.

The Spanish and European champions' night was spoiled by a nasty-looking injury to Busquets.

The Spain midfielder had come off the bench only a few minutes earlier before he sustained a deep gash below his right knee in a challenge with Sociedad defender Carlos Martinez.

Initial local media reports said it was nothing serious and he may be available for Wednesday's Cup game against Valencia.

In the earlier kickoff in Madrid, Ramos rose above the home defence to head a Mesut Ozil corner high into the net in the 18th minute as Real brushed aside the team who inflicted Barca's only defeat of the season in November.

They comfortably held a toothless Getafe at bay and it was a sixth straight league win for Jose Mourinho's side since they lost 3-1 at home to Barca in December.

Fourth-placed Levante, Valencia's second club, missed the chance to close within two points of their more illustrious city rivals when they surrendered the lead and were held to a 1-1 draw at home by struggling Racing Santander.

The draw leaves Levante without a win in six games since they beat Sevilla 1-0 in December and puts them on 32 points, four behind Valencia, who play at a resurgent Atletico Madrid on Sunday.

Athletic Bilbao were on the verge of leapfrogging Levante into the fourth Champions League qualifying spot but conceded an added time goal in an entertaining 3-3 draw at home to Espanyol.

Barcelona-based Espanyol are fifth on 32 points behind Levante on goal difference, with Bilbao two points back on 30 and Atletico on 29 in seventh.

Real Mallorca climbed away from the relegation places when Gonzalo Castro's splendid first-half freekick was enough for a 1-0 win at home to Real Betis.

© Copyright 2022 Reuters Limited. All rights reserved. Republication or redistribution of Reuters content, including by framing or similar means, is expressly prohibited without the prior written consent of Reuters. Reuters shall not be liable for any errors or delays in the content, or for any actions taken in reliance thereon.
Related News: Lionel Messi, Levante, Barca, Valencia, Real Sociedad
COMMENT
Print this article 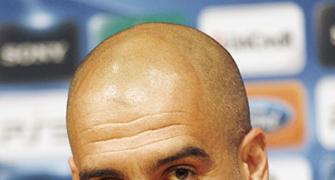