'Mein taras rahi thi to compete at this level.'
'Now that I am here, I will not take this opportunity lightly.' Nikhat Zareen is in a positive frame of mind heading into the World Boxing Championships in Turkey.

The 25-year-old pugilist had a tough time waiting in the wings for her turn to arrive. A junior World champ (2011) and World Youth silver medallist (2014), she recently showed her class while winning gold at the Strandja Memorial in Sofia, Bulgaria, upsetting Tokyo Olympics silver medallist Busenaz Cakiroglu in the semi-finals and Ukraine's Tetiana Kob, another former World Championship medallist, in the final.

Nikhat had a successful junior career, but surely taking over London Olympics bronze medallist M C Mary Kom's spot in the 51 kg weight category represents one of the biggest challenges of her career.

Going into the World Championships she is bubbling with happiness, and there is no hint of nervousness or anxiety. She has been preparing for this moment her whole life and now, it is the Nizamabad girl's chance at glory.

As she prepares to head to her first World Championships in the 51 kg weight category, Nikhat tells Laxmi Negi/Rediff.com she has plenty in her armoury to go the distance. 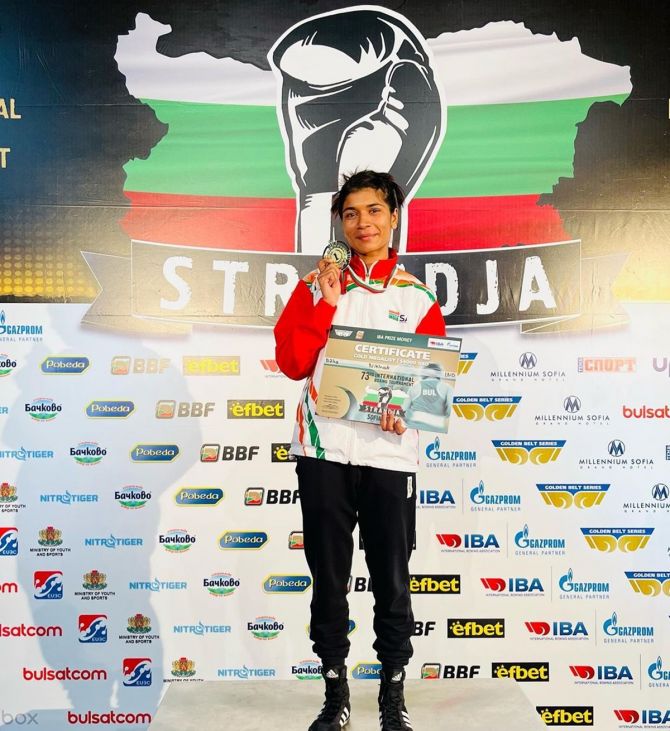 You have an opportunity to ascend to greatness. Your thoughts on the World Championships in May?

The World Championships is one of the biggest tournaments for me. Of course, you have the Olympics, where you get the best boxers. But in the World Championships, it is a huge pool of 30-32 boxers from all the possible countries. So I am excited and at the same time leaving no stone unturned to be shipshape.

You will be fighting in the 51 kg category for the first time. Do you regret participating in 2016 in the 54 kg category?

Absolutely zero regrets. I was lucky that from the Youth Championships I got the opportunity to be in the Indian team and represent my country in the senior World Championships. I took that experience under my belt and won two bouts and reached the quarter-finals. It was all part of my learning curve.

Also, at that time there were two senior boxers fighting for that category (Pinki Jhangra and Mary Kom). I couldn't think of sidelining them and vying for that spot.

A lot of boxers do not get that kind of opportunity. So I will always look at it in a positive way.

In 2022, we will see a lot of in the 51 kg category (World Championships, Asian Games). This category has been synonymous with Mary Kom.
How much is the pressure to perform as you will have big shoes to fill?

About the Asian Games, again I wasn't sure whether she would be participating, but I kept working hard from my end.

One thing I know is that I will be giving 100 per cent. Winning and losing is different.

No one goes to any tournament to lose. That's why I will look at what is in my control, like working hard. Rest is God's will whether I come back with a medal.

Mein taras rahi thi (I was waiting for this moment) to compete at this level. Now that I am here, I will not take this opportunity lightly. 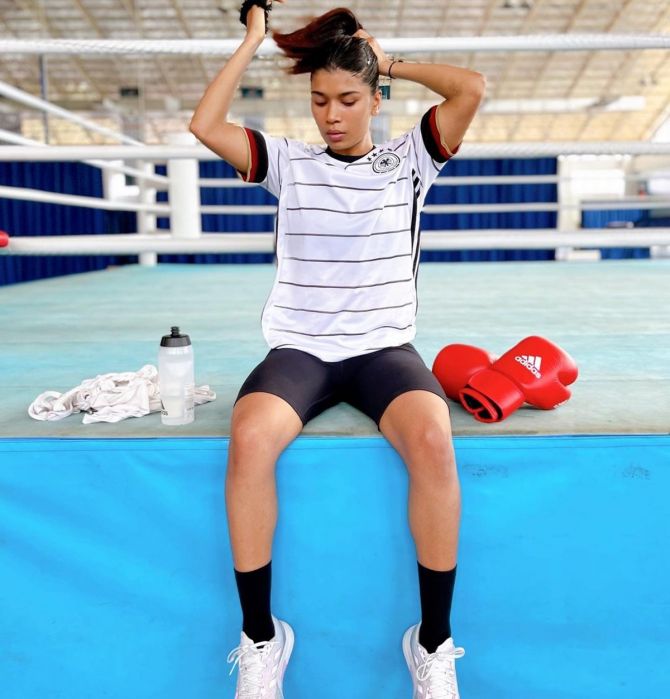 How are you preparing yourself for this World Championships?

I am working very closely with my coaches to rectify my mistakes. Also, there will be boxers from all the continents, so we are devising strategies how to fight them.

Like Asians are fast, Europeans have powerful punches; so how would I negate their strengths? I am also working on fighting against southpaw boxers.

How have you evolved as a boxer?

Over time all of us evolve. If we don't, we will stagnate. As a boxer, I learn new things and implement it in the ring. But one thing I can say -- I am wiser and a mentally strong person now.

You are the first Indian boxer to win two gold medals at the Strandja tournament. In 2019 you were new, yet you won gold. How different was it in 2022?

(Laughs.) Of course, after two gold medals, it is!

In 2019, I was the second-choice boxer. The first choice being Pinki Jhangra. In the semis I beat the European champion and went on to win gold. It was special because being a second-choice boxer form my country I came back with a gold medal.

In 2022, I beat two Olympic medallists. I cherish this medal more because I went there as the first choice boxer from my country. And after I won the semis against Tokyo Olympics silver medallist Buse Naz Cakiroglu (Turkey), it gave me confidence in the final.

Is there something you learned that you will remember for the rest of your life?

Apni dil ki suno, mehnat ka phal milega (listen to your heart, you will reap the fruits of your hard work). 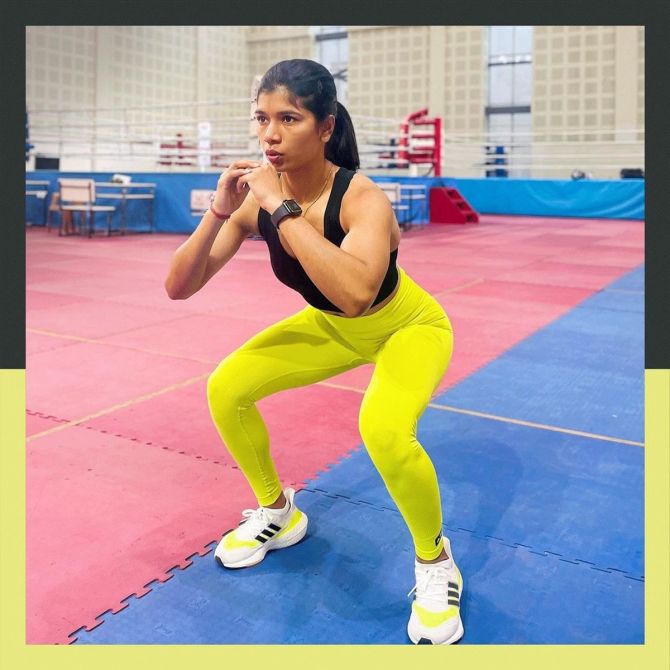 After the Tokyo Olympics snub, how did you motivate yourself to box again?

I fought and gave my call in the trials. I wasn't selected to go to the Tokyo Olympics. I took it in my stride and took a break.

To start afresh, you need to move on. I did the same from that incident. I went home and relaxed.

Then COVID-19 happened, the Olympics were postponed and everyone was sitting at home like me.

There were no camps and no training, no sparring, but I believed that this too shall pass.

It did and there was a national camp for a month-and-a-half and later we went for the Bosphorus boxing event in Istanbul. In the semis I lost to Turkey's Buse Naz Cakiroglu. I learnt from my mistakes and beat her in the Strandja semi-finals. It was sweet revenge for me.

The World Championships were supposed to be in December when they got postponed, I thought that whatever happens, happens for the good.

Had the World Championships been in December, maybe I wouldn't have had the kind of confidence I have right now after beating two Olympic medallists.

Is the Paris Olympics on your mind?

The Paris Olympics is my ultimate goal, but now, I am working very hard to win a medal at the World Championships.

What kind of music do you listen to during training and just before the bout?

I start my day with a peaceful na'at. My playlist has all kinds of music for various moods. I have '80s, '90s and 2000s music. I listen to Punjabi, Haryanvi, Telugu, Hindi and English songs.

Before the bout, motivational songs like the Brothers anthem, Rise of Sultan, Chak de India, Hall of Fame.