Federer may have set the benchmark on how to do tennis retirements.
He didn't go out in a blaze of lonely glory, but in the warmth of friendships formed over the years, observes Deepti Patwardhan. 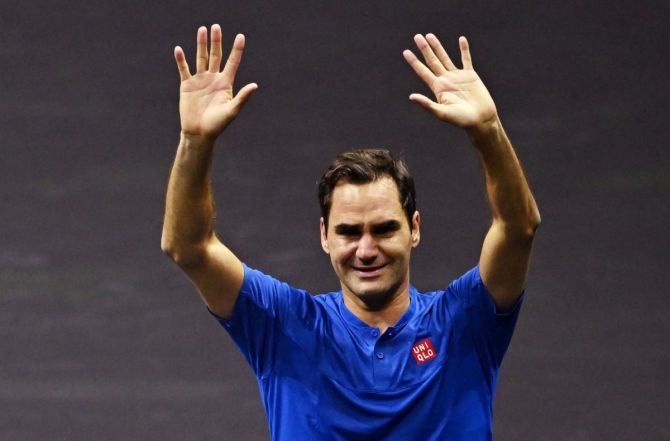 IMAGE: Roger Federer waves at fans at the end of his last match in compettive tennis after announcing his retirement. Photograph: Dylan Martinez/Reuters

This is how Roger Federer went into retirement: On the shoulders of present and future stars of tennis.

After an emotional final match at the Laver Cup, in which he teamed up with Rafael Nadal, Federer was lifted off the court by Novak Djokovic, Matteo Berrettini, Frances Tiafoe and Felix Auger-Aliassime in a kind of celebration usually reserved for captains or coaches of championship-winning teams.

Only Federer could turn competitors into cheerleaders; reduce his long-time rival Nadal to tears as he bid farewell.

On Friday, there was a moment when, after the match, he stepped onto the court one last time to acknowledge the fans that had made way into London's O2 Arena.

For a man who rarely betrayed emotion while playing, he evoked it like no other.

'I'm happy, I'm not sad,' an overwhelmed Federer said during his on-court interview to Jim Courier.

'It does feel like a celebration to me. I wanted to feel like this at the end, and it's exactly what I hoped for, so thank you.'

Like he had for 24 years, Federer may have set the benchmark on how to do tennis retirements.

He didn't go out in a blaze of lonely glory, but in the warmth of friendships formed over the years. He loved the sport and wanted everyone to fall in love with it.

At his peak, Federer thoroughly ruled men's tennis, but that domination was only part of the legend.

His game was at once new-age and timeless. Federer played the game with a creativity and fluency never seen before.

While Federer, brought up on the clay courts in Europe, was a natural baseliner he stepped up and volleyed with practiced perfection.

He could figure out his opponents, problem-solve the situation on his twinkly toes.

He could court the polite crowds of Wimbledon just as easily as he would wow the raucous New Yorkers.

He was gracious in victory and in defeat.

He was a tennis practitioner and spokesperson rolled into one.

Tennis writers could endlessly describe his athletic movement, the under-rated but precise serve, the beauty of his single-handed backhand and the ferocity of his forehand and feel terribly inadequate.

In the opening set, the 41 year old let a forehand rip through the strings that tied the net to the pole. Talk of threading the needle.

These were the margins Federer had been playing all his life, centimetres between victory and defeat.

While his art remained inimitable, it always remained accessible. Win or lose, Federer helped the media deconstruct his matches in five different languages.

He made time for legions of fans, across continents, across generations, and engaged with them.

Federer is famous because he was loved, not the other way around. 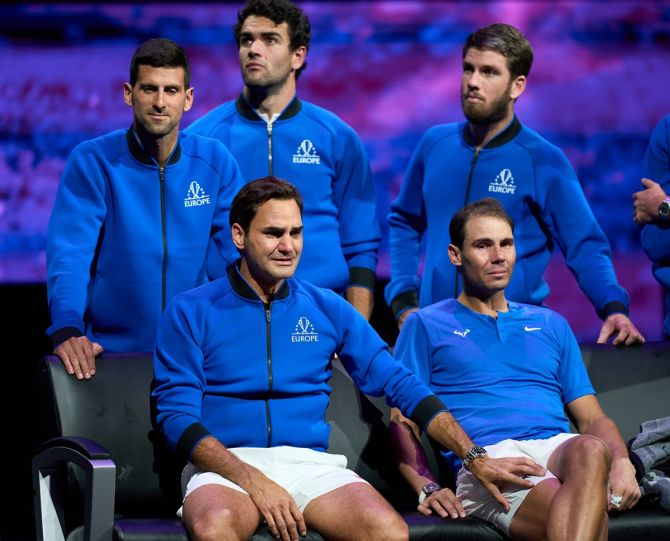 In the first half of his career, the Swiss, with his fine-tuned tennis, made the game look effortless, winning look routine.

He elevated tennis, made his competitors rise up to the challenge.

When rivals came, first in the form of Nadal and then Novak Djokovic, rather than cutting them down, Federer used it to get better, take the game higher.

The fact that he was able to compete as an equal against players five years younger to him for so long speaks of his longevity.

The renaissance came in 2017, when a relaxed and rehabbed (from knee surgery) Federer came out of a six-month hiatus to score perhaps his most famous win.

In the final of the 2017 Australian Open, the Swiss once again took on Nadal, a player who had a definite mental edge over him.

It was a definitive win in the latter part of his career, where Federer showed he wasn't averse to grinding out wins.

He finished with a career tally of 20 Grand Slam titles.

'When Roger leaves the tour, an important part of my life is leaving too,' said Nadal after the match on Friday.

There will be a void as Nadal loses his fiercest rival.

But for most, Federer's farewell felt like losing something beautiful.

Ever since he announced his retirement, on September 15, there has been a flourish of personal Federer anecdotes.

Be it a shot, or an interaction, or his goofy sense of humour or one of his many post-win tear-laden speeches.

He moved people; made them feel a part of his journey.

Now we stand at the end of it. Sad that it's over but happy that it happened.