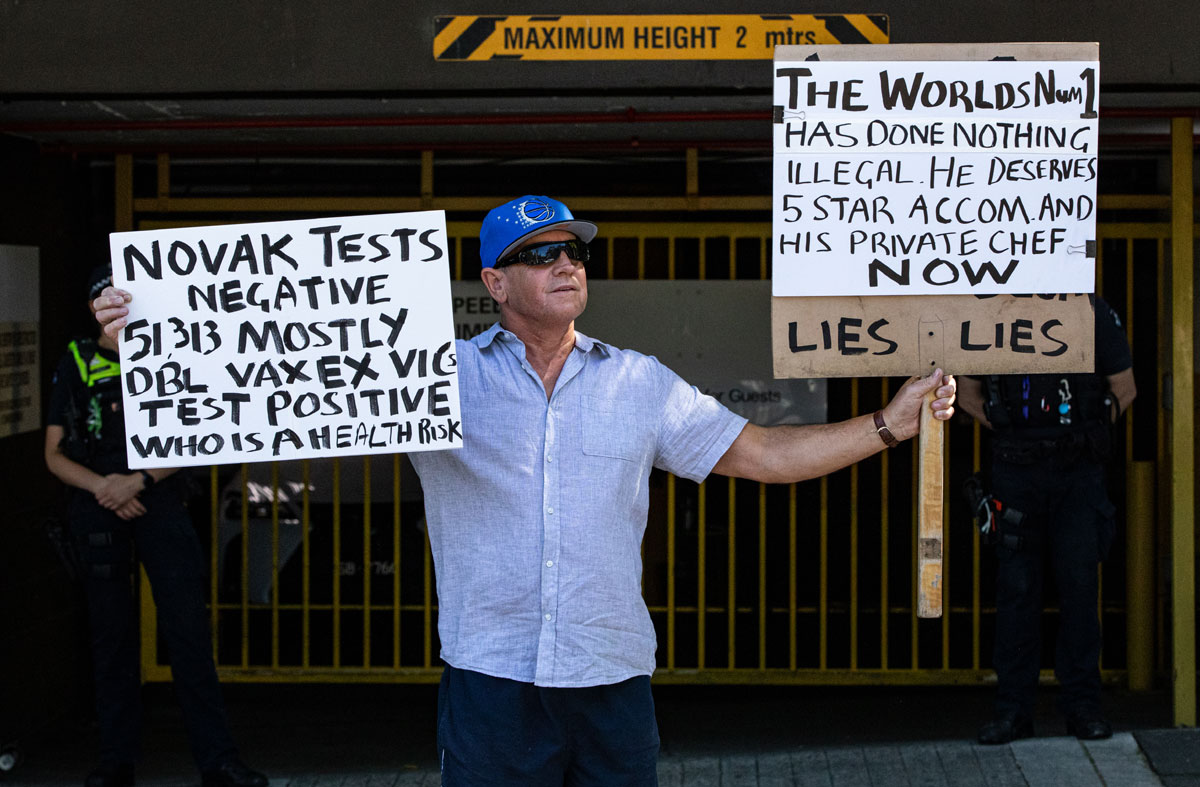 IMAGE: A Novak Djokovic fan outside the Park Hotel in Melbourne on Monday as police stand guard. Djokovic is in a detention hotel in Melbourne after his visa was cancelled on arrival to Australia last week. Photograph: Diego Fedele/Getty Images

World No 1 Novak Djokovic was released from Australian immigration detention on Monday after winning a court challenge to remain in the country to pursue his bid for a record 21st Grand Slam title at the upcoming Australian Open.

Judge Anthony Kelly ruled the federal government's decision last week to revoke the Serbian tennis star's visa amid a row over his medical exemption from COVID-19 vaccination requirements was "unreasonable" and ordered his release.

Lawyers for the federal government, however, indicated the fight may not be over, telling the court that Immigration Minister Alex Hawke was reserving the right to exercise his personal power to again revoke Djokovic's visa.

After confirming that such a step, if taken, would bar 34-year-old Djokovic from the country for three years, Kelly warned the government lawyers that "the stakes have now risen, rather than receded."

Hawke's office did not immediately respond to requests for comment.

Djokovic's plight has been closely followed around the world, creating diplomatic tensions between Belgrade and Canberra and sparking heated debate over national vaccination rules.

Kelly also ordered the federal government to pay legal costs for Djokovic, who spent several days in an immigration detention hotel, noting that his lawyers argued his "personal and professional reputation and his economic interests may be directly affected".

News of the ruling was greeted with noisy celebrations, drum beating and dancing by a group of around 50 supporters, many draped in the Serbian flag, outside the Melbourne court.

"It was a sleepless night for the family," his brother, Djordje Djokovic, told Belgrade's TV Prva. "Novak showed his perseverance and trust in himself. He showed he's a great man."

However, Djordje Djokovic said the family was concerned at the potential his brother would again be detained and ordered to leave Australia.

Spanish rival Rafa Nadal called the drama surrounding the build-up to the tournament, which starts on Jan. 17, a "circus".

"Whether or not I agree with Djokovic on some things, justice has spoken and has said that he has the right to participate in the Australian Open and I think it is the fairest decision to do so," Nadal told Spanish radio Onda Cero.

Djokovic, who was present in his lawyers' chambers for the hearing, did not immediately appear in public or make a statement after the ruling.

Judge Kelly said he had quashed the decision to block Djokovic's entry to Australia because the player was not given enough time to speak to tennis organisers and lawyers to respond fully after he was notified of the intent to cancel his visa.

Kelly noted that officials at Melbourne's airport made the player switch off his phone from midnight until around 7.42 a.m. local time, when the decision to cancel his visa was made.

Officials also reneged on an agreement to give Djokovic until 8.30 a.m. to speak to tournament organiser Tennis Australia and lawyers, the judge said.

Djokovic was instead woken up by officials at around 6.00 a.m. after a brief rest and said he felt pressured to respond. The player, a long-term vocal opponent of mandatory vaccination, told border officials he was unvaccinated and had had COVID-19 twice, according to a transcript of the interview.

Kelly earlier told the court it appeared Djokovic had sought and received the required medical exemption from COVID-19 vaccination on the basis that he had contracted the virus last month. He had presented evidence of this before he travelled to Melbourne and when he landed on Wednesday evening.

"What more could this man have done?" Kelly said.

Kelly's ruling did not directly address the issue of whether the exemption on the grounds of an infection in the past six months was valid, which the government had disputed.

Tennis Australia CEO Craig Tiley said earlier that his organisation had spoken with federal and state officials for months to ensure the safe passage of players. Tennis Australia did not immediately respond to a request for comment.

Djokovic's case had caused anger in Australia, where more than 90% of the adult population is double vaccinated and public opinion has been largely against the player.

The country's COVID-19 cases surpassed 1 million on Monday, with more than half of them recorded in the past week, driving up hospitalisation numbers, straining supply chains and overloading testing facilities.

The saga kicked off when Djokovic posted a photo of himself leaning on his luggage on Instagram last Tuesday, telling the world he was headed to Australia to compete in the Open with a vaccination exemption.

© Copyright 2022 Reuters Limited. All rights reserved. Republication or redistribution of Reuters content, including by framing or similar means, is expressly prohibited without the prior written consent of Reuters. Reuters shall not be liable for any errors or delays in the content, or for any actions taken in reliance thereon.
Related News: Novak Djokovic, Australia, Judge Anthony Kelly, Nicholas Wood, Federal Circuit and Family Court
COMMENT
Print this article