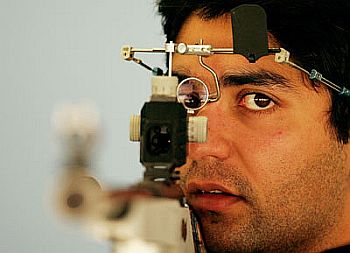 Annoyed at being treated like a 'Mr Nobody' by the national federation, India's [Images] first and only individual Olympic gold medalist Abhinav Bindra [Images] is planning to quit shooting.

The 27-year-old world champion, who clinched the historic Olympic gold medal in the 10m air rifle event at the 2008 Beijing [Images] Games, is tired of being at loggerheads with the National Rifles Association of India.

"He is annoyed that his point of view is not being taken properly by the national body and he is being treated like a Mr Nobody. He needs space to do his training and prepare himself for this year's Commonwealth Games [Images] and the Asian Games the way he prepared for the Olympics [Images]," Abhinav's father A S Bindra said in Chandigarh.

Abhinav has defied NRAI in the past as well, openly criticising its functioning, and the latest standoff has been provoked by the body's insistence on his presence at national level trials.

"He has been asked to undergo trials and he even agreed to it. He came all the way from Germany [Images] for some trials on December 18 but to his dismay, the trials were postponed. He has requested that he be exempted from such trials not once but twice. He can't be harassed like this," A S Bindra said.

"His emotional state is very low. He is planning that if 'I am subjected to such harassment then it's better to quit then confront'," he added.

The NRAI, however, dismissed Abhinav's allegations and said the body never misinformed him about the trial schedule.

"We never told him that trials are on December 18. Actually, he never wants to come to trials in India," retorted NRAI secretary Rajiv Bhatia.

Abhinav's father said the only way out now is to allow the shooter to train the way he wants.

"If the country wants him to compete then the way out is to let him train. He is training with the support of the sports ministry. They know his every movement. His international scores should be considered for selection," he said.