For four years, after the dust has settled down at Roland Garros, Rafael Nadal [Images], with his boyish grin and sweat-soaked hair, has been the last man standing.

Nadal may appear in flashy attire but Federer is the one with a flashier game. Unfortunately for the Swiss, the Phillippe Chatrier Court, as Novak Djokovic pointed out, is even slower than the outside courts, is more a theatre of war than a canvas for an artist.

For most of the last three years, Federer tried to battle Nadal from the back of the court till the backhand finally gave in and the forehand became adversely affected. This year, even if the scores suggest it was Federer's worst match on clay, he tried to change things a bit. But the ideas were too many for his own good, and execution shaky.

The minute his pin-point accurate winners gain or lose a few inches -- the unforced errors rack up -- his game seems to fall from it's natural grace.

In the middle of the second set he found his range, marched to the net, found some improbable angles and was close to breaking Nadal's service -- in the seventh game -- for the second time. A botched forehand volley put the fightback to rest as Nadal won the next nine games and clinched the title.

Spring in Paris is over. Now begins the Federer season; the Swiss has a winning streak of 59 on grass.

If the analysts at London [Images] are to be believed, Nadal has tidied up his grass game considerably and is looking forward to another face-off with Federer on Centre Court on the second Sunday of the tournament.

He won the Queen's tournament on Sunday, to become the first since Romanian Ilie Nastase in 1973 to win a title on grass straight after claiming the French Open. Nadal played with a confidence and fire that had sometimes been lacking on grass tournaments apart from the Big W. Add to that, he is a much improved player and his sound groundstrokes now carry a menacing edge.

The world number two, undoubtedly, has form and confidence on his side. But that may still not be enough to dethrone Federer at the grass court Slam. 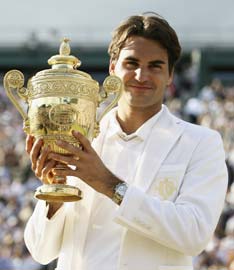 The scars of the beating at the French Open will still be raw. And Federer will only be too aware of the Nadal threat. If anything, and the 12 Grand Slam titles are a testament, he knows how to win on the big stage.

There will be too much at stake this year. Apart from the record of six consecutive titles at Wimbledon at stake, Federer will not want to submit to Nadal on 'his own' surface. His high-risk game, that seems too fragile on red clay, will find an ally on grass and the serves might yet again make the difference.

Federer's slump was apparent in the first half of the season not only because of the drought of titles but because he was losing to all kinds of players, including his favourite whipping boy Andy Roddick [Images], and, sometimes, frustratingly so, from dominant positions.

How much the bout of mononucleosis weakened his cause is not known, since Federer later said the five-set escape against Janko Tipsarveic at the Australian Open was at the height of the illness.

The list of rivals now does not start and end with Nadal; there are the faceless many lurking in the locker room who now refuse to be driven away by the 'monster' he created.

'Earlier, winning Grand Slams was almost easy. But now it became a real struggle,' Pete Sampras said during his late slump at the turn of the century.

Federer also has it almost too easy, or made it look so. Since the beginning of 2004, he has at least reached the semi-final of all the Grand Slams, taking the tally to 16 at this year's French Open.

The struggle will begin for him now. Never has he been looked upon with so much doubt or asked to defend his territory at Wimbeldon with greater vehemence.

He has lost too much ground this year; Wimbledon should be his salvation.