Peering out said window, I see drunken revellers swarm past in droves. They high-five one another, swill from open containers of booze and proudly point to their team's logo on blue hats, shirts and jackets, which everyone seems to be wearing. A man does an Irish jig on Lexington Avenue, while a companion plays accompanying bagpipes. Horns honk, girls scream and a few testosterone-riddled alpha-males heckle a lone man in Patriots clothing, who scuttles down into the subway, covering his head and moving quickly to avoid confrontation.

On the street, a man walks past me, talking on his cell-phone: "Dude, can you (expletive) believe it? The New York (expletive) Giants won the Super Bowl!"

It's not how the story was supposed to end. 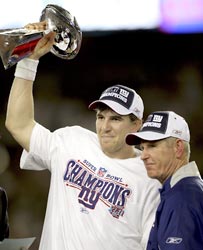 The New York Giants, plagued throughout the 2007-2008 season by injuries and inconsistent play, scored two touchdowns in the final period to beat the seemingly-invincible New England [Images] Patriots in Super Bowl XLII, by a score of 17-14.

The Giants, who posted 14 wins and 6 losses on the year, and who barely made the NFL playoffs as the 5th of 6 seeds, tarnished juggernaut New England's (18-1) previously perfect record, and wrested away a title that the majority of speculators had all but awarded the team from Boston.

The Giants, on the other hand, stumbled through the 2006-2007 season with a record of 8 wins and 8 losses, and began this year with consecutive embarrassing defeats; it once appeared certain that head coach Tom Coughlin would lose his job before the season's finish.

Moreover, New Yorkers had all but given up on wunderkind quarterback Eli Manning, whose uninspiring play early in the year was a hot topic of debate on the airwaves and in the city's streets.

On the other hand, during the regular season, the Patriots became the first team to go through their entire slate of games without a loss since the Miami [Images] Dolphins accomplished the feat in 1972.

Given the Patriots' ruthless efficiency and overwhelming talent, many pundits had prematurely assigned them the title of "Best team of all time", before the final game had even been played.

According to bookies in Las Vegas [Images], America's sports-gambling capital, the Patriots were supposed to win the game by two touchdowns, and were considered 14-point favourites over the 'questionable' Giants.

But it was the Giants who had the last laugh; and it was the previously vilified Coughlin and Manning who laughed the loudest.

Coughlin concocted a brilliant scheme of conservative, possession-based offensive play to complement a ferocious, attack-oriented, blitzing defence. The pass rush, led by defensive ends Michael Strahan and Justin Tuck, hounded Brady throughout, to the tune of 5 quarterback sacks and numerous pressures, forcing the star quarterback into errant throws, and even an uncharacteristic turnover. Brady, who is renowned for his cool temperament and pinpoint accuracy, appeared flustered and frustrated for the first time in ages. His girlfriend, supermodel Giselle Bundchen, repeatedly covered her face in horror as Brady was dumped unceremoniously to the turf of University of Phoenix Stadium in Glendale, Arizona. 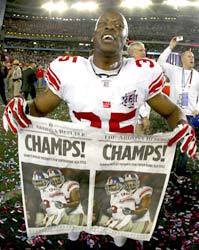 After a rough patch in the game's second quarter, Eli Manning, who is heir to football's most famous family (Both his father Archie and older brother Peyton are famed quarterbacks), played his role to perfection, leading two magnificent drives for touchdowns in the 4th quarter. He threw for over 150 yards in the final period, a remarkable feat, including the game's deciding score inside the final one minute, a 13 yard touchdown pass to wide receiver Plaxico Burress with just 35 seconds remaining. New England, with so little time left on the clock, was relegated to launching deep passes in desperation, which were harmlessly swatted down by New York's swarming defence.

Ironically, it was Burress who drew heat from the media following his January 29 guarantee that the Giants would emerge victorious, a boast which was considered implausible and childish. Most people felt the Giants had less than a 10% chance of winning.

For me, watching the game took on special significance. Back in the States after 12 months in India, I was able to watch my first football game in real-time in over a year; and what a game it was! ESPN.com is already polling its users, asking "Is this the greatest Super Bowl of all time? Is this the most shocking result you can remember?"

Furthermore, seeing the mighty Patriots get their comeuppance, after years of borderline dirty play and ethically questionable tactics, made the viewing experience doubly special. In fact, a smile is still plastered on my face; and I keep watching, rewinding and rewatching the game's highlights, some three hours after its conclusion.

The Super Bowl is annually the most viewed programme across America, and has been since the early 1970's. It's watched by approximately 40% of households in the United States, and has become a major cultural event and national holiday of sorts. It features the most expensive marketing space in the world, set at RS 80,000,000 for a thirty second advertisement.

And this year's big spenders got every bit their money's worth, as the game was truly one for the ages.

So while some members of my craft may be bemoaning the result, trashing pre-written headlines that read "Patriots make history, finish undefeated", and staying up late to hastily rework copy, this journalist is ecstatic.

The game reminded me why I love American Football. It was intense, frenetic and action-packed. The hits, blocks and tackles were bone-jarring, and actually resulted in several small injuries for both squads.

Manning's Houdini move to avoid a sure sack and 32 yard pass to David Tyree with 59 seconds left will be shown on NFL highlight videos for the next thirty years. Had the improbable play gone the other way, the Patriots would have clinched victory. For a team that seemingly had the stars aligned in their favour throughout the year, it was surreal to see all the bounces go against them.

But that's why I love this game; because, as the slogan goes: "Any team can win on any given Sunday."