The city of Mumbai can boast of another unique feather in its cap, a Community-based football club.

In an exciting development that will have far-reaching consequences for the development of grass root football in the city, and raising the standard of the game in the country, the logo and name of Mumbai FC, a major football initiative by the Essel Group, was launched by Managing Director Amit Goenka amidst much fanfare at the Cricket Club of India on Thursday.

Launched with the credo that "every Mumbaikar who feels he or she has the talent to play football, in the age group of eight to 40 years, will get a chance to participate in the development of football culture in Mumbai", Mumbai FC has already made some giant strides in the right direction.

After roping in Henry Menezes as the General Manager, Mumbai FC pulled off a coup of sorts by enlisting the services of David Booth as the Chief Coach to guide the team's fortunes, the acid test of which will come in the Mumbai District Football Association's leagues, where Mumbai FC has been granted entry into the Elite Division. 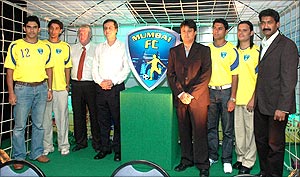 Henry Menezes brings with him a unique combination of player-manager, having played for the country for eight years, winning the Shiv Chatrapati award in 1986, before making the transition into a full-time football manager, and gaining the reputation of being among the top managers in the country.

David Booth is an experienced international coach, having been the National coach of Myanmar and Brunei. He also worked in the UK, Ghana, Vietnam, Thailand and Maldives. He is also a qualified AFC instructor and has enjoyed prolonged stints with leading clubs.

"As a responsible corporate house, we always wondered about the depth to which the standard of football has fallen during the past many years. We believe the standards of any sporting event can improve only when the corporate houses take active interest in developing the game at the grass root level.

"We therefore propose to launch a community-based Football Club in Mumbai to give every football loving citizen an opportunity to participate in the development of football culture in the city," said Amit Goenka, Managing Director, Essel Group, which recently launched the Indian Cricket League.

Menezes, General Manager of Mumbai FC said, "India lacks community-based teams that people can relate to. The launch of Mumbai FC will be a platform for the football community in Mumbai, soon becoming a powerhouse for football in the country. This is going to be a great challenge to the entire team behind Mumbai FC and we are committed and confident of living up to the expectations."

Much thought has gone into the launch of Mumbai FC, with no expense and effort being spared to meet every requirement of the AIFF and also keeping in mind the vision of AIFF in line with FIFA towards promoting football in the country.

To gain entry into the second Division of the National Football League meant having in its ranks a number of international, national and state level payers, which Mumbai FC fulfilled. The AIFF also stipulated that the club should have under-19 and under-15 teams, access to a practice ground, gymnasium and a home stadium, and should adopt one school.

Towards this end, Mumbai FC has tied up with the Thakur Group of Kandivli, which gives it access to a full-fledged practice ground, gymnasium and a tie-up with three schools and two colleges. The home stadium for Mumbai FC will be the Cooperage.

Besides the public face of Mumbai FC, which will revolve around the senior teams and under-19 and under-15 teams, there will be regular community-based activities involving groups right from the age of 8 to 45 plus, bringing fun and enjoyment into the game of football. Connecting Mumbai's football community to Mumbai FC will be an interactive website mumbaifc.com. The website is already up for registrations and will be developed accordingly.

The players are in place, the support staff and paraphernalia is ready. The playing field is the city of Mumbai and the spectators its entire football community. The ball has been rolled by Mumbai FC. Let the Game Begin!