Manchester United [Images] captain Roy Keane bowed out of international football on Friday two days after Ireland's World Cup campaign ended in a match the injured midfielder could only watch. 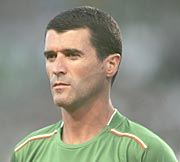 "Like all football supporters in the country I am disappointed that the Republic of Ireland failed to qualify for the World Cup finals," Keane said in a statement read by state broadcaster RTE.

"Much as I would like to continue playing for my country, I feel the time has come when I should retire from international football and concentrate on domestic football for whatever remains of my football career."

Ireland finished fourth in a tight European Group Four on Wednesday after a goalless draw against Switzerland [Images] at home. Keane, who broke a bone in his foot last month, did not play in either of Ireland's last matches.

He had always said he would retire after the 2006 World Cup finals in Germany [Images] or if Ireland failed to qualify.

Cork-born Keane, who won 66 caps, missed the last World Cup after walking out before the 2002 tournament in South Korea and Japan [Images] started following a row with then manager Mick McCarthy.

But the 34-year-old's relationship with current manager Brian Kerr, whose job could be on the line following Ireland's failure to reach the finals, has been better.

"I am aware of the efforts that Brian Kerr and his staff made in an endeavour to qualify for the World Cup finals ... I believe the recent criticism of Brian in the media is both unjust and unfair," Keane said in his statement.

"I would like to thank everyone for the support which they have given me during my international career," he added.

Keane said last month he was likely to leave Manchester United at the end of the season, indicating he might play at another club or in another country.

Assistant manager Carlos Queiroz said last month United would not try to find a new Roy Keane when he leaves the club because the combative midfielder is unique.

"You just create new players and new teams and that's how and why the game moves forward."

Keane won his first cap against Chile in 1991 and played in the 1994 World Cup finals, scoring nine goals during his time with Ireland.

He has played a pivotal part in Manchester United's successes since joining from Nottingham Forest for 3.75 million pounds ($6.62 million) in 1993, but has ruled out a move to the coaching staff at Old Trafford.