Argentina coach Jose Pekerman described Lionel Messi [Images] as a jewel after the 18-year-old made his long-awaited home debut in Sunday's World Cup qualifier against Peru.

Pekerman appeared to bow to popular pressure when he gave the Barcelona player his first international start. 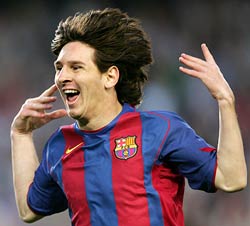 Messi responded by winning the late penalty, converted by Juan Roman Riquelme, which allowed Argentina to break down Peru's stubborn resistance and set up a 2-0 win.

"He's phenomenal, a jewel," Pekerman told reporters after the game. "Let's hope that we can look after him and avoid the problems which can sometimes happen.

"It looks as if we've found someone who is going to give us a lot of happiness. The fact that this lad is already playing this type of match says it all."

Messi, who inspired the Argentina team which won the World Youth Championship earlier this year, had previously made two brief appearances for the senior side.

His first, in August, was an unhappy one. Less than two minutes after coming on as a substitute in the friendly against Hungary in Budapest, he was harshly sent off for elbowing an opponent.

After getting the full support of Pekerman and his colleagues, Messi was given eight minutes in last month's 1-0 defeat in Paraguay.

Messi ran at the Peru defence from the outset, never appeared intimidated, even in the face of some late tackles, and was rewarded when he was up-ended by Peru goalkeeper Leao Butron and awarded a penalty in the 81st minute.

According to the newspaper La Nacion, Messi suffered seven fouls during the game and had five shots on goal.

Before the game, Messi had barely kicked a ball in his homeland.

He joined Barcelona at the age of 13, having played a handful of matches for the youth team at Newell's Old Boys in his native Rosario.

After that, he played in a couple of warm-ups last year for the under-20 team.

On Sunday, around 30 relatives, including his parents, travelled from Rosario to watch his first senior match in his Argentina.

"Messi is a promise that is turning into reality," said his strike partner Hernan Crespo [Images], 12 years Messi's senior. "It's not easy to play in the Monumental [River Plate stadium] when it's full in the way that he did."