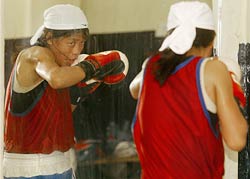 Mery Kom reigned supreme in the world for the second successive year after successfully spearheading the Indian women to their maiden Asian Championships team title with ease but struggled to draw much attention at home, where people were busy following some more fancied sporting disciplines.

That the light-flyweight pugilist was from a village of less than 300 population called Kangathei in Manipur and secured all the glory when she and her husband were still jobless and trying hard to make two ends meet, made her feats all the more impressive.

In the World Boxing Championships at Podolsk, near Moscow [Images] in Russia [Images], the Indian women's team once again rose to occasion as they returned with a gold and won four bronze medals.

Following the series of victories, India looked at its women as strong prospects for a medal as the International Olympic Council (IOC) and AIBA had in principle agreed to induct the sport in the next Olympics [Images] at Beijing [Images] in 2008.

But the IOC poured cold water on its hopes by turning down the proposal after the World Championships citing the sport was still in nascent stage to be included in Olympics.

Close on heels of their women counterparts' Asian glory, men pugilists were crowned the Commonwealth Champions for the first time after they garnered nine medals -- four gold, three silver and two bronze -- in the fourth edition of the event in Glasgow, Scotland.

2002 Commonwealth Games finallist Som Bahadur Pun was declared the 'most courageous boxer of the championship' in the 64 kg division.

Olympian Akhil Kumar (54 kg), A L Lakra (57 kg) and Jitender Kumar (91 kg) were the other winners while Balbir Singh (48 kg), Arun Singh (51kg) and Vijender (69kg) bagged silver among the pugilists from around 15 Commonwealth nations.

The Amateur Indian Boxing Federation said the change in boxers style of landing punches did the trick for them. They were asked to use straight punches, which are more scoring than hooks or uppercuts.

Pugilists, however, could not reap any benefit of their changed techniques in the senior Asian Championships in Ho Chi Minh, Vietnam.

The outing proved to be a forgettable one for the Indians as only one of their contenders -- Jai Bhagwan in the lightweight category -- survived till the semi-final round.

Vijender, who was pulled out from the juniors' category to represent the country at the Athens Olympics, gave a boost to his confidence when he defeated Olympic bronze medallist of South Korea in an exhibition bout at Challengers' Fight Night.

Controversies also had their share in shaping the year as Indian boxing authorities called for sanctions against their Pakistani counterparts for their failure in arranging visas for Indian pugilists' participation in the inaugural Asian junior tournament in Karachi.

A 14-member Indian team was forced to cancel the tour at the last moment after Pakistan's Interior Ministry refused visas to the boxers without giving any reason.

The championships was aimed at grooming young Asian boxers for the 2008 Olympics so that in three years they could give a tough fight to boxers in Europe and America.

Interestingly, Anwar Chowdhary heads all the three Associations -- ABF, AIBA and PBF -- and he had already made it clear that he would not be able to help the Pakistan Boxing Federation if the international body decided to impose sanctions.

The Indian authorities also faced some embarrassment when the Asian Invitational Championship had to be scrapped owing to the organisers -- Pimpri-Chinchwad Municipal Corportaion, Pune refusing to cooperate, at the last moment.