'Yeh BBC Hai'. You won't hear these words from Feb 1

For 80 years, news and views aired on BBC Hindi reached audiences in the remotest parts of the country. For millions of its followers, the signature line –‘yeh BBC hai (this is BBC)’ -- has been like a morning alarm, and the bulletins a vital link between India and the world.

That link, which began when there was no mobile phone or internet, is about to break as the radio service will fall silent after January 31.

And for many living in smaller towns and in rural areas, life won’t be the same again, writes Nivedita Mookerji. 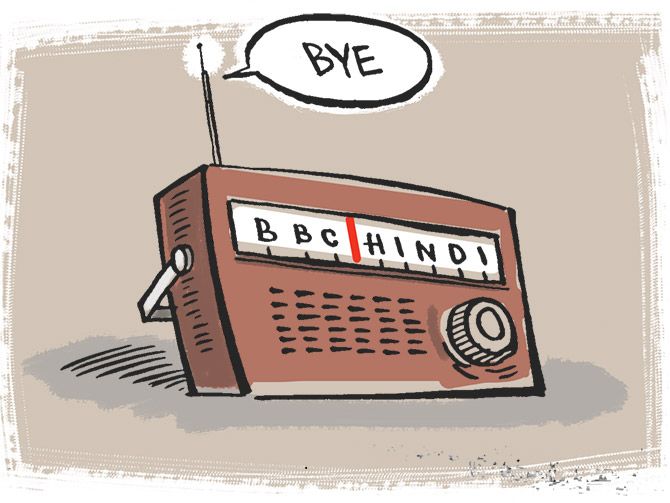 Whether it’s English breakfast tea, fish and chips or the royalty, tradition is a way of life for the British, perhaps more than anywhere else in the world. That explains the wide coverage that Harry and Meghan got for quitting royal life.

Closer home, shutting down of BBC Hindi service end of this month is no less a jolt to the British tradition.

For 80 years, news and views aired on this platform reached audiences in the remotest parts of the country. For millions of its followers, the signature line –‘yeh BBC hai (this is BBC)’ -- has been like a morning alarm, and the bulletins a vital link between India and the world.

That link, which began when there was no mobile phone or internet, is about to break.

And, as a recent chat broadcast on this station among some of the well-known anchors on BBC Hindi revealed, listeners are resisting the shutdown.

Many of them have even made offers to part-fund the service if financing is an issue, only to be told that the era of shortwave radio has passed.

BBC Hindi’s first transmission on May 11, 1940, almost coincided with Winston Churchill becoming the prime minister of Britain. It was then known as BBC Hindustani Service.

Those were the days of World War II and the service targeted soldiers from the subcontinent, serving the British empire. Founded by eminent Indian broadcaster Zulfiqar Bokhari, the Hindustani Service was re-launched as Hindi Service in January 1949.

BBC Hindi, known for its all-round coverage of news ranging from Indo-Pak war to Bangladeshi independence, Emergency to Operation Blue Star and Indira Gandhi's assassination, has also been a platform for several star broadcasters.

Among the prominent names who’ve been presenters on BBC Hindi include former Bollywood star Balraj Sahni and I K Gujral, who later became the prime minister of the country.

In the recent past, Achala Sharma, Pervaiz Alam and Rehan Fazal were among those who carried on the tradition.

As a presenter pointed out, the service has been so popular in the Hindi-speaking belt of Uttar Pradesh, Bihar and Jharkhand that a presenter’s voice was often recognised without any prompting.

In one such instance, a presenter was travelling by train and joined in with his comment when others in a compartment were discussing a current issue. One of them asked if he was the same person presenting news on BBC Hindi the other day.

Apart from a cash crunch that started surfacing in 2011, technology-related issues came in the way for the service.

Tuning in to a shortwave transmission got equally tough. In fact, radio manufacturers mostly stopped producing devices with a shortwave band.

It’s not a coincidence that even All India Radio (AIR) has been toying with the idea of phasing out shortwave radio services.

Radio waves in the shortwave band can be reflected or refracted from a layer of electrically charged atoms in the atmosphere called the ionosphere, a website on the subject explains.

‘Therefore, short waves directed at an angle into the sky can be reflected back to earth at great distances, beyond the horizon.’

Besides news, shortwave has often been found effective for emergency purposes and disaster management. including in aviation and marine communication.

Ruxandra Obreja, chairman of Digital Radio Mondiale, in a recent write-up posed these questions: When is the last time you heard a shortwave radio transmission? And why should you put up with possible crackly audio and some interference when we now have internet, satellites, FM and all forms of digital radio?

Her own response to that was: This holds true if you are in London, Boston, Paris or Toronto. But what if you are on an island in Indonesia, or find yourself in West China, in Kashmir or in Brazilian Amazonia? Whether we like it or not, there are several remote places in this vast world, many of which still depend on shortwave broadcasting.

Well, whatever shortwave may stand for, BBC Hindi will fall silent after January 31.

For many living in smaller towns and in rural areas, life won’t be the same again.