Less than half the ministers in Team Yogi are not long-term BJP members.
Many old-timers have been dropped, points out Syed Firdaus Ashraf.
Data: Hemantkumar Shivsaran. 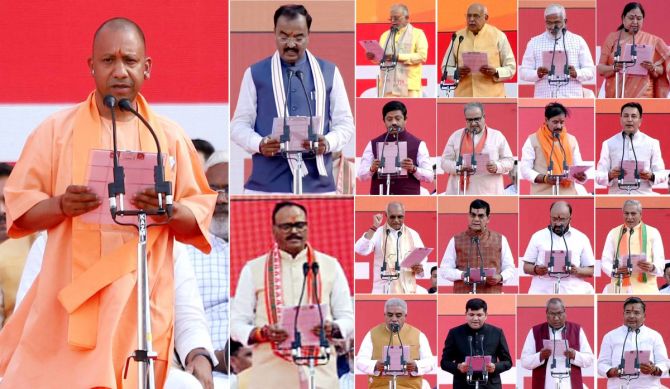 Uttar Pradesh Chief Minister Yogi Adityanath's 52-member ministry is like a lavish spread on a buffet table as the list includes members of different castes and communities, all included with an eye on the 2024 general election.

The list includes one Sunni Muslim minister in Danish Azad Ansari and a Sikh minister in Baldev Singh Aulakh.

Of the 52 ministers, the maximum number is accounted for by the Other Backward Castes.

Though many Dalits voted in large numbers for the Bharatiya Janata Party in the recent assembly election, the Samajwadi Party proved a point by making inroads in reserved constituencies by winning 24 seats out of 86 reserved seats.

In the 2017 assembly election, the BJP and its allies won 76 of these 86 reserved seats. Five years later, the BJP could win only 57 seats, reducing their numbers by 19 seats.

The BJP, it seems, is keen on conveying to voters that it is no longer a party of upper caste men, an allegation which OBC leader Swami Prasad Maurya made before leaving the BJP and joining the Samajwadi Party.

In the new UP ministry, there are seven Thakurs including Yogi Adityanath, and seven Brahmin ministers.

The larger ministry representation for OBCs and Dalits is a signal to Akhilesh Yadav that his experiment of a wider caste coalition may fail him in the future too as the BJP has penetrated UP's caste politics deeply.

Among the five women ministers, three are Dalits, the most prominent being Baby Rani Maurya who was governor of Uttarakhand till recently. She quit her post and contested the election from the Agra Rural (SC) seat.

In terms of wealth, 40 of the 52 ministers are crorepatis. 22 of them have criminal cases pending against them.

Only one minister, Suresh Rahi, has been convicted for a criminal offence -- for obstructing a public servant from doing their duty -- but then went on to appeal against his conviction.

In terms of education qualifications, 20 ministers are post-graduates and 16 are graduates including the chief minister who has a BSc in mathematics. Four are Class 12 pass; three are Class 10 pass. Two ministers have not passed Class 10.

An important inclusion in the Yogi ministry is Arvind Kumar Sharma, a former Gujarat cadre IAS officer who is perceived to be close to Prime Minister Narendra Damodardas Modi with whom he worked with in Gandhinagar and in New Delhi.

When A K Sharma resigned from the IAS -- he was then a joint secretary in the prime minister's office -- to join the BJP in Uttar Pradesh, he was snubbed by Yogi.

Yogi probably felt that Modi wanted to keep an eye on his functioning through Sharma and therefore did not induct him in his cabinet.

The COVID crisis, however, changed relations between Yogi and Sharma who proved his administrative abilities by helping to flatten the coronavirus wave in Varanasi, Modi's Lok Sabha constituency. This model was subsequently followed across Uttar Pradesh.

By adding 31 new faces in the ministry and retaining only 21 from the Yogi 1.0 ministry, the chief minister and his political supervisors in New Delhi also emphasised that no matter if you are new to the BJP, you will be welcome but only if you are committed to the party.

An example is Brijesh Pathak, who replaces Dinesh Sharma as deputy chief minister.

A student leader, he was with the Congress, but moved to the Bahujan Samaj Party in 2002 and won the Unnao Lok Sabha seat.

When BSP supremo Mayawati experimented with Brahmin and Dalit politics, he was instrumental in seeing the party getting stronger along with another Brahmin leader, Satish Chandra Mishra. Pathak was rewarded with a Rajya Sabha seat in 2009.

He lost the Unnao Lok Sabha seat on a BSP ticket in 2014 when the Modi wave swept the country, and joined the BJP in 2016 to become law minister in Yogi's cabinet in 2017.

Pathak's plus point was that he made his presence and his party's presence felt among the aggrieved Brahmin community after gangster Vikas Dubey, a Brahmin, was slain in a police encounter near Kanpur.

Like Pathak, the BJP inducted another savvy Brahmin leader in Jitin Prasada, the former Congressman who joined the party last year.

Less than half the ministers in Team Yogi are not long-term associates of the BJP and many old-timers have been dropped in Yogi 2.0.

However, Keshav Prasad Maurya, who lost the election from the Sirathu constituency by 7,000 votes, was retained as deputy CM, probably keeping his OBC background in mind.

Maurya found favour from the party's top-most bosses, just like Uttarakhand Chief Minister Pushkar Singh Dhami who too lost the election, but was made CM again.