Winter session of Parliament may be scrapped

Alternatively, the government may go in for a five-day session to blunt criticism that it was running away from debate
R Rajagopalan reports. 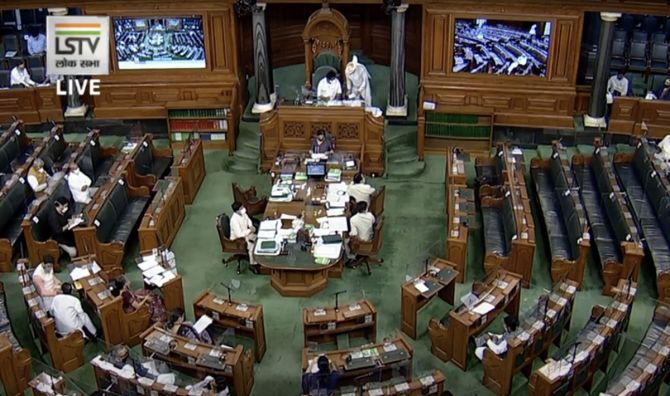 IMAGE: The monsoon session of the Lok Sabha under way in September. Photograph: ANI Photo/LSTV

It seems very likely that there will be no winter session of Parliament in November due to the coronavirus pandemic.

This information was shared with this correspondent by a highly placed source in the Narendra Modi government.

Alternatively, the government may go in for a five-day session to blunt criticism that it was running away from debates, the source added, and that informal consultations with the Opposition were taking place before a decision is taken.

If it is decided to skip the three-week winter session usually convened in November, the Modi government will straightaway head into the Budget session from January.

As per the tentative schedule drawn up, the Budget session of Parliament will convene on January 28, 2021, a Thursday, with President Ram Nath Kovind addressing the joint session.

The Economic Survey will be tabled the next day, and the Union Budget will be presented on February 1, 2021, Monday.

There are several reasons behind the thinking to skip the winter session, most of it stemming from the recently concluded monsoon session.

That one saw the two Houses sittings staggered between morning and afternoon. More to it, the Lok Sabha MPs first took their seats in the Rajya Sabha and in public galleries to ensure social distancing, something that has never been done before, causing dissatisfaction and confusion among the MPs, the source said.

Apart from that, other key reasons were cited for planning to skip the winter session.

1. During the monsoon session of Parliament, two MPs died and the ruling Bharatiya Janata Party lost a Union minister to coronavirus.

2. Chairman of the Rajya Sabha Muppavarapu Venkaiah Naidu has only now recovered after a fortnight-long Covid infection. No one expected Naidu to be infected by coronavirus as he took great precautions like maintaining social protocols, wearing a mask, washing hands, etc.

3. Some 200 employees of Parliament, including senior officers, were affected by coronavirus.

4. The Opposition too had sought that ministers cut short the monsoon session, though there were 15 elements of government business still to be transacted.

5. Southern MPs, especially from southern Tamil Nadu and Kerala, have to undertake a long journey, and in some cases take two flights, to reach Delhi.

6. Some 85 departments, 3500 officials and 250 drivers are engaged for a Parliament session, apart from 850 Parliament staff.

Union health ministry apprehends that junior employees are the most affected by coronavirus as seniors get to work from home.

The leg work is done by the section officers and assistant grade employees. This was the lesson the ruling dispensation learnt during the monsoon session.

7. There are 350 MPs from both Houses of Parliament above the age of 60 who are more vulnerable to coronavirus.

8. ICMR discovered that there are fungal spores in the old Parliament building, and fear it could act as a super spreader of the dreaded virus.

9. A review meeting taken by senior officials of Parliament after the monsoon session also threw open many new points to skip the winter session, which were being considered.

A final decision is expected to be taken at a meeting of officials on October 22 convened by Parliamentary Affairs Minister Prahlad Joshi, who himself tested positive for coronavirus and has since recovered.

Following this he will put up a note to the Cabinet sub-committee on parliamentary affairs for a final decision.

The winter session of Parliament usually begins in the third week of November and ends by the third Friday of December, just before Christmas.

This year may see a rupture in the time-honoured schedule.